Review: All I Ask by Corinne Michaels 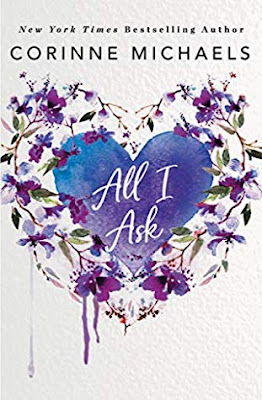 Teagan Berkeley is trying her best. A single mom raising a precocious teen, she may have given up on her dreams, but she’s accepted her life in her small beachside hometown. Now the one person who abandoned her when she needed him the most has returned, bringing back memories of what might have been.

Derek Hartz arrives in town with a teenage daughter-and he’s full of guilt over his failed marriage and the way he ended his friendship with Teagan. He’s determined to set things right with her, but first he needs to gain her trust, something he’s not convinced he deserves.

As Teagan and Derek open up to each other-and confess their deepest secrets-it’s impossible for them to deny what’s always been between them. But just when their happily ever after is within reach, their complicated history surfaces again and threatens to keep them apart. Forever.

Before we start talking about All I Ask, please go watch the music video for Marry Me by Thomas Rhett. I'll wait...

Sneaks off to watch the video... again...

Now that you've hopefully listened to that song, we can discuss this book. Going into the book, I didn't know it was based on the Thomas Rhett song. Girl loves boy. Boy secretly loves girl. Girl watches boy marry another girl. Girl goes on to marry another boy. Years pass.. Boy and girl find themselves face to face. Hearts battered. Precious time lost. Will their love heal old wounds?

There were so many elements I loved about All I Ask and now that I've watched the video for Marry Me, I want to read it again. There was something about this book that burrowed into my heart and it hasn't left since. The writing was absolutely breathtaking. The romance between Derek and Teagan was nothing short of perfection. I could feel Teagan's heart shatter as she watched Derek's wedding. Derek's hopes that the two of them could finally be together... Their hearts soar and grow as they find themselves with a future. Every last bit of this book was superb. Now that Corinne Michaels is on my radar, I cannot wait to read more of her books in the future.

Corinne Michaels is a New York Times, USA Today, and Wall Street Journal bestselling author of romance novels. Her stories are chock full of emotion, humor, and unrelenting love, and she enjoys putting her characters through intense heartbreak before finding a way to heal them through their struggles.

Corinne is a former Navy wife and happily married to the man of her dreams. She began her writing career after spending months away from her husband while he was deployed-reading and writing were her escapes from the loneliness. Corinne now lives in Virginia with her husband and is the emotional, witty, sarcastic, and fun-loving mom of two beautiful children.