Review: Fake it 'Til You Make it (Ready or Not #1) by Jayce Carter 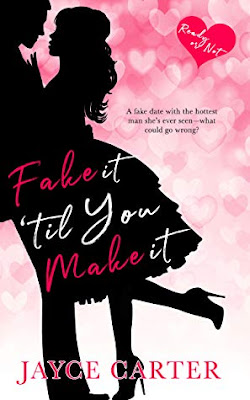 Fake it 'Til You Make it
Author: Jayce Carter
Series: Ready or Not #1
Publisher: Totally Bound
Published: March 17, 2020
Source: publisher for review

A fake date with the hottest man she’s ever seen—what could go wrong?

Tara’s ex-husband is a cheating dirtbag, but when he hits an all-time high on the douche-meter and invites her to his wedding, she can’t stomach the idea of showing up sans date. Everyone already thinks she’s a loser—why prove them right? Over a few too many margaritas, Tara hatches a brilliant scheme to show up with the hottest man she can find on her arm. She can make her ex jealous, show everyone she’s moved on then part ways with her fake-date. No fuss, no muss. What could possibly go wrong?

Unfortunately, her fake-boyfriend Chris turns out to be more than just a ridiculously pretty face. The man is hot enough to melt the panties off a saint, and when she discovers his humor—and the mind-blowing sex he offers—she starts playing jump rope with the line between real and fake.

What started out as an easy way to make her ex jealous quickly turns messy as Tara starts to catch some very real feelings. Will she try to transform the fake relationship into something real, or will she throw in the towel and accept it was all make-believe?

Oh, my god. This book was a flipping blast to read. I've been craving two kinds of books lately, one of which is romantic comedy. Preferably with sex... And honestly, it's been awhile since I've read a book from Totally Bound. Hello two birds with one stone! :)

Fake it 'Til You Make It ... What can I say? I don't know if it satisfied my craving for romantic comedy or made me want to read more. It had everything in its corner... fake romance-turned-more, fantastic writing, fun and witty dialog, and some steamy sex. The characters were great. Their chemistry was off the charts. I devoured it. And now I am searching high and low for more books from the author. Cannot wait for the next book. Also... can I punch Harry in the balls?

Jayce Carter lives in Southern California with her husband and two spawns. She originally wanted to take over the world but realized that would require wearing pants. This led her to choosing writing, a completely pants-free occupation. She has a fear of heights yet rock climbs for fun and enjoys making up excuses for not going out and socializing.