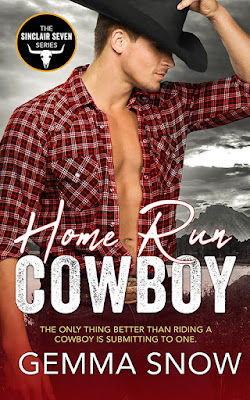 "Enjoy the rest of your day, Ms. Wedgeworth," he said, "because your night is mine." - Caleb Cash
Home Run Cowboy
Author: Gemma Snow
Series: The Sinclair Seven #1
Publisher: Totally Bound
Published: May 4, 2021
Source: publisher for review
Buy Links: Amazon - Barnes & Noble - iBooks - Google Play - First For Romance
Add to Goodreads
The only thing better than riding a cowboy is submitting to one.
On her own for the first time, Skylar Wedgeworth has no idea what to do about it. She’s torn between behaving like the hard-working mom she’s dedicated her life to being…and embracing her fascination with the erotic world of lust and submission she has long put second.
That’s where The Ranch comes in. And with it, Caleb Cash.
The injury that cut short Caleb’s pitching career just before he joined the majors, then his wife walking out on him have made Caleb question everything about himself, and he hasn’t had a partner since.
Until Skylar.
There’s no denying the heat between them when Skylar checks into the erotic lifestyle club Caleb and his six best friends opened in the Montana mountains, but for things to go further than their physical connection, Skylar has to learn how to put herself first and Caleb must be willing to trust a new partner with his heart…

Hoo, boy! Where do I even begin with this sexy lil romance? It's no big surprise that I flipping love erotic romance. There is just something about two characters openly experiencing and enjoying different kinds of sex. While I still love all kinds of romance, erotic romance tends to hold a special place for me.
While I was reading Home Run Cowboy, there were two elements that immediately jumped out to me. The first was the setting. The idea of a ranch living a double life, quite honestly, made me giggle. I love that some guests are there purely for the ranch experience, while others are their to explore their kinkier side. Not going to lie, I sincerely hope we get a heroine that accidentally finds out about the nighttime activities and is curious enough to join in. That would be a fantastic spin on this series.
As for the second element, if you want to be surprised, stop here...
Okay, one of my all time favorite erotic romances is Sweet Surrender by Maya Banks. Why? In that book, we've got a hero that shares the heroine with another man (who happens to be a friend of hers, if I'm remembering correctly). I love fantasy aspects like this. To me, it is sexy as all hell, but it's also not something that I find a lot in books. Home Run Cowboy has a scene reminiscent of the sharing scene in Sweet Surrender. However, in this book there is no penetration between the heroine and the hero's friend. There are no words to describe how much I loved that scene.
Okay, you can come back now.
I thoroughly enjoyed Home Run Cowboy. It had all of the things I love about erotic romance and more. It had fantastic characters. I loved Skylar and Caleb together. Skylar is at a point in her life where she needs to spread her wings more. She's a strong woman who has had a rough go at life and has fought hard to not only survive, but to also have a successful career. And then we have Caleb who also has his fair share of demons that he fought to get to this point in his life where he's finally ready to explore intimacy again. And quite possibly the best part? It is the 1st book in a brand new series. More romance at The Ranch? Hell yes!

Oh, they were high up now.
Ev had brought Skylar to Open Air Skydiving to get her mind off things, just as she had taken her white-water rafting, dancing and drinking, hiking, and movie binging, but it turned out that things had taken Skylar’s mind off skydiving and she was very suddenly hit with the realization that she was about to jump out of a plane.
Sweat ran down the cotton shirt pressed to Skylar’s back by the bulk of her diving gear and the attached diving instructor. She leaned over to hear what her best friend was saying.
“Of course you miss her.” Ev had to shout to be heard over the roar of the small plane’s engine and the whirling wind that beat against metal. This wasn’t a good idea. Why had she thought it was a good idea? “You know that’s okay, right? You’re allowed to miss her.”
It was just the rush of air coming from the open door that had Skylar’s eyes watering behind the plastic goggles they’d been given when they checked into Open Air Skydiving Center just outside of DC earlier that afternoon. Just the air pressure and not the pressure behind her eyes, or anything ridiculous like that.
“I know,” Skylar shouted with more conviction than she felt. How was it she could be more than ten thousand feet above the ground and still feel this sense of malaise? “I was just hoping that sunshine and hot men would make me forget about it for a while.”
That had been the plan. A jaunt around Greece—exploring the coasts and the beaches, visiting some of the world’s most beautiful historic sites, getting tan and drinking local wine until the day she returned to the city—all with the hope that their home wouldn’t feel quite so quiet when she got back.
“You know that Callie is totally going to take on the world, right? Don’t think of it as your little girl going off to college. Think of it as…as the next step toward her Nobel Peace Prize.” Ev raised her voice even more to be heard. She leaned close and put her hand on Skylar’s, and goodness if Skylar didn’t need the kind of comforting touch Ev brought, even if it was slightly inhibited by the two diving instructors strapped to their backs, diving instructors who were now communicating that their jump point was coming up.
Oh…boy.
“Maybe this isn’t such a good idea…” The words were swallowed by the sound of the instructors moving about the cabin of the plane. Then Skylar was right there, standing over the world, her stomach somewhere at her feet, and the sweat she had been feeling a moment ago cooling into a panic that made her shiver.
“Are you ready?” her instructor asked, but the words were swallowed up on the wind and he didn’t give her a chance to respond before her feet were no longer anchored to the floor of the plane, before none of her body was anchored to the plane, but out in the open air, nearly three miles above the ground, a dizzying display of city and farmland and highway spreading out around them like the rug Callie had had in her room when she’d been a child.
Wait until she told Callie…
Callie would think this was the coolest thing Skylar had ever done.
With that thought in mind, Skylar spread her arms and relaxed her body enough to let the wind buoy her. Her heart pounded faster than the whirling plane propeller above them and her mouth was open in an eternal scream. This was terrifying, this was stupid, this was….
Amazing.
Her instructor pulled the cord and the parachute yanked them back, pressing hard against Skylar’s body and knocking the air from her chest for a moment. In a moment they were floating above the Virginia farmlands, a million tiny barns and homes and buildings coming into focus as they followed the natural course of the air. This was peace, somehow, in a tumult of chaos. In a whirlwind of everything that had happened these past weeks, she somehow felt at peace miles above the solid ground and wished, fleetingly, stupidly, that she never had to touch down again.
When her feet hit the ground, she stumbled but didn’t lose her balance and a rush of adrenaline coursed through her body. She wanted to dance, to swim across a river, to go back to Greece and figure out exactly what she had run away from by coming back from her Mediterranean adventures nearly a week earlier than she had planned and allowing Ev and her partners to toss her into every available adventure within three hours of the city.
As if she could hear her thoughts, Ev touched down a few hundred yards from Skylar, whooping and hollering with the same delight that raced through Skylar’s body right now. Soon they were disentangled from their chutes and Skylar was running over to Ev, wrapping her in a hug and swinging her around. Adrenaline made picking up her friend easier than expected and she could almost see how mothers could lift cars off their children in emergencies.
“That was wild!” She was definitely shouting but Ev didn’t seem to realize. “Let’s go again!” 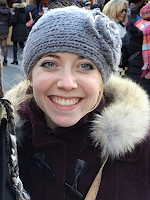 Gemma Snow loves high heat, high adventures and high expectations for her heroes! Her stories are set in the past and present, from the glittering streets of Paris to cowboy-rich Triple Diamond Ranch in Wolf Creek, Montana.
In her free time, she loves to travel, and spent several months living in a fourteenth-century castle in the Netherlands. When not exploring the world, she likes dreaming up stories, eating spicy food, driving fast cars and talking to strangers. She recently moved to Nashville with a cute redheaded cat and a cute redheaded boy.
Website - Facebook - Blog - Instagram - First for Romance

GEMMA SNOW IS GIVING AWAY FABULOUS PRIZE TO ONE LUCKY WINNER. ENTER HERE FOR YOUR CHANCE TO WIN AND GET A FREE EBOOK FROM THE AUTHOR! Notice: This competition ends on 18TH May 2021 at 5pm GMT. Competition hosted by Totally Entwined Group.