Holiday in Hiding by Lily Michaels 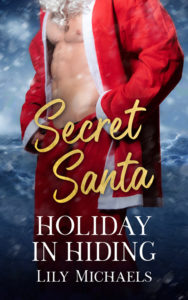 Hiding from his past may wind up leading Liam to the merriest Christmas of his life.

Constantly looking over his shoulder has become Liam Carlson’s norm after five years in witness protection. Living with his new identity has come with a major downgrade in lifestyle and a lack of any meaningful connections. But when he loses his minimum-wage job and the rundown apartment he called home, he finds himself in the middle of a Texas state park waiting for the marshal in charge of his case to help with relocation. A sudden, ferocious storm destroys many of his belongings, including the tent that offered him some protection, but it also heralds in a sexy-as-hell park ranger, Jax Gallagher, who taunts Liam’s long-neglected libido.

Jax and his wife, Megan, have had an unconventional relationship from the beginning, with a military romance that blossomed into marriage. Their mutual desire to share their love with a third member resulted in several blissful years with another man that ended when they left the service and took on civilian careers. An unexpected visitor in the form of a drenched Liam is the first glimmer of hope since then that they can reclaim the happily-ever-after they thought they’d lost. Their attraction grows with every second they spend together. While they become closer, another lifesaving rescue also manages to open the door to a career Liam never fathomed.

But the truth of the criminal world Liam grew up in threatens to destroy the still-tenuous bond the three are forming and the bright future Liam never believed possible.

Reader advisory: This book contains a description of an injured or abused animal.

I cannot lie, I am a sucker for any M/M/F romance. I feel like it is an under represented trope within multiple partner romances. Whenever I do find one I immediately have to read it. That's kind of what happened with Holiday in Hiding. It is a fairly short romance, but boy howdy it was so good. Jax and Megan have an open relationship. After 5 years in witness protection, Liam is in a bad patch of road. One bad storm brings the 3 of them together. In the short time I spent reading Holiday in Hiding, I loved getting to know Jax, Megan, and Liam. Jax is incredibly trusting, wanting to help Liam the minute he saw him. At first glance, it seems like Megan is just along for the ride. However, she's a strong woman that would do anything for her husband and now Liam. As for Liam, he definitely has gotten the short end of the stick. He's been through so much, but he's resilient and I think that made him so much stronger. I loved the three of them together. Each brought something to their new relationship. Mix in the author's fun writing style, add in some very hot scenes, and you've got a very fun book.

Choose Your Store
First For Romance

Coffee, chocolate, and books make up Lily’s world, often all three at the same time. Whether reading or writing she is a sucker for an over-the-top happily ever after… only following an appropriate amount of pain, of course.

When she is not writing or reading (which is not very often) she enjoys exercising her right brain in non authorly ways such as creating mosaics, crocheting, knitting, scrapbooking, and taking one man’s trash to create something new. But never, ever ask her to draw something. That is a beast best left alone. 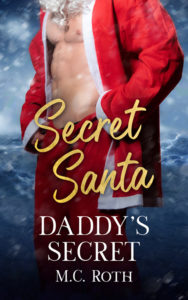 This Christmas promises to be the loneliest of Sullivan’s life and he’s set to brave the season alone until he receives an amazing, yet heartbreaking, Secret Santa gift that was inspired by his best friend’s pen pal, Lincoln.

What starts as a thank-you letter to Lincoln soon becomes more as Sullivan finds himself drawn to a man he’s never met—a man who somehow seems to know him. The problem is, Sullivan needs a friend more than he needs a hookup, so he pretends to be married, taking an intimate relationship out of the equation.

Soon pen and paper aren’t enough, and he writes his phone number in his next letter, hoping that Lincoln will call him. When Lincoln finally does, Sullivan’s breath catches at the sound of his voice. When Sullivan pretends that his fake husband is away on a business trip, Lincoln invites himself over for a Christmas movie marathon.

Beside each other on the small couch, the lines begin to blur and Sullivan curses himself for pretending to be married. But maybe he’s not the only one with a secret.

Choose Your Store
First For Romance

M.C. Roth lives in Canada and loves every season, even the dreaded Canadian winter. She graduated with honours from the Associate Diploma Program in Veterinary Technology at the University of Guelph before choosing a different career path.

Between caring for her young son, spending time with her husband, and feeding treats to her menagerie of animals, she still spends every spare second devoted to her passion for writing.

She loves growing peppers that are hot enough to make grown men cry, but she doesn’t like spicy food herself. Her favourite thing, other than writing of course, is to find a quiet place in the wilderness and listen to the birds while dreaming about the gorgeous men in her head.

Find out more about M.C. Roth at her website.

Enter for the chance to win a $50.00 First for Romance Gift Card! Competition hosted by Totally Entwined Group.