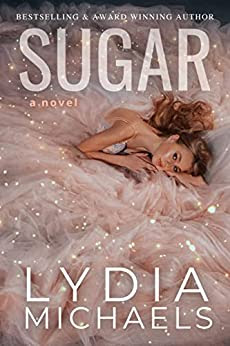 Sugar
Author: Lydia Michaels
Publisher: Bailey Brown Publishing
Published: September 29, 2020
Source: author for review
A sexy alpha male from the poshest part of Philadelphia gets snowed in with his beautiful neighbor in this modern day rags-to-riches, enemies to lovers romance from bestselling and award winning author, Lydia Michaels.
Avery Johansson is borrowing against her youth and beauty to afford a better future by working as a sugar baby. Gifted at playing the role of a delicate female, she makes a living by stroking men’s egos. But the real Avery prefers leather over lace and spice instead of nice.
Noah Wolfe is used to getting exactly what he wants when he wants, and when he sets his sights on his sexy neighbor, he’s determined to have her. Little does he know, the soft female across the hall doesn’t swoon for roses–she plays with the thorns.
Two dominant hearts collide in an explosion of sin and safewords as boundaries are pressed to the limit in a battle of power and ultimate possession.

I really wanted to love this one. I mean, who doesn't love a romance between two strong willed, dominate characters? Sign us up, right? However, Noah and Avery were not what I wanted.
Avery came from a not-so-nice background. She's had to raise herself up and do whatever it took to be in the position she's in now. For a smart and tough woman she she did run and hide a lot. Kisses Noah. Hides and ignores him for a week. Spends the night with Noah. Hides and ignores him for a week. Then instead of giving Noah time to adjust and decide if he's okay letting her be dominate in the bedroom, she immediately fights back and pushes him away. No discussion. Nothing. It's all or nothing for her and that came off a bit of a spoiled child to me. That's not how relationships work, especially one that has an element of kink.
Noah was no saint. Someone needed to slap some sense into him and when Avery did (though she claimed it slipped), his idea was to spank her. What. The. Fuck? The man would not take no for answer and that pissed me off. He would push his way into her life, but when she says they can only be friends, he decides that that isn't enough. He decides to try to make her jealous by kissing another woman. No, thanks.
The relationship between Avery and Noah was borderline toxic. At no point did I want them to be together. I really did not feel the chemistry between them other than the initial attraction. While I do enjoy a toxic relationship from time to time, I just did not feel anything towards these two as a couple.
With all that said, I did still enjoy reading this book. Lydia's writing style was fantastic. Her writing made it really easy to fall into this world. The sexy scenes were very well written. I think that is why I believed the attraction between the two characters, but it didn't feel long-lasting. The pace of the book was great. It never lagged, which was another reason why I kept coming back to it. It never felt like the story was bogging down. I enjoyed the book, but didn't like the characters.

Lydia Michaels is the award winning and bestselling author of over forty novels, including the groundbreaking collection, Write 10K in a Day. She is the consecutive winner of the 2018 & 2019 Author of the Year Award from Happenings Media, as well as the recipient of the 2014 Best Author Award from the Courier Times. She has been featured in USA Today, Romantic Times Magazine, Love & Lace, and more. As the host and founder of the East Coast Author Convention and the Behind the Keys Author Retreat, Lydia Michaels plays a respected role in the book community. When she’s not working on her next novel, she is accepting speaking engagements and using her platform to advocate for positive author business practices and doing whatever she can to empower female entrepreneurs around the world.
Lydia is happily married to her childhood sweetheart. Some of her favorite things include the scent of paperback books, listening to her husband play piano, escaping to her coastal home at the Jersey Shore, cheap wine, 80’s pop culture, coffee, and kilts. She hopes to meet you soon at one of her many upcoming events.
Website - Facebook - Twitter - Instagram
Posted by CrystalBee at 12:23 PM