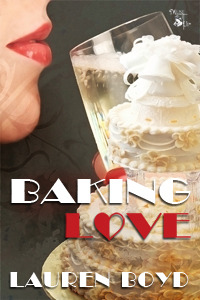 Three years ago, Kate Sullivan fell in love with her best friend, Eric Wagner. Before she could tell him, he abruptly ended their friendship. Now Eric has walked into Kate’s bakery and back into her life—but why? Is he here to confess his love for her?

No. He’s here to order his groom’s cake. He’s getting married…to another woman.


* * * * * * * *
This was such a cute book! I had my reservations before reading it (long story that involves another book), but it turned out to be better than I was hoping for. I love a good "friends to lovers" romance, especially one with a little "second chance" twist.
This is the story of Kate and Eric. High school friends that lost touch after he went away to college in New York. Kate was secretly in love with him, but was afraid that she'd lose him if she expressed her feelings. Unfortunately, she lost him anyway. His dumbass picked a girlfriend over Kate. I could have slapped him upside the head when I read that. What was he thinking?!? I felt horrible for Kate. Here she is, in love with a guy that is not only getting married, but is also hiring her to make his wedding cake. Ouch! Eric, being a guy, was oblivious of her feelings and just kept putting her in tough situations. At first, I didn't like Eric because of his actions. I felt like he only thought about himself and never stopped to consider Kate's feelings. I had to remind myself that he didn't know her feelings towards him and I think all he wanted was their friendship back. So, I spent the last half of the book in love with both of them and started rooting for them to wake up and see what was in front of them.
I was a little hesitant before reading the book was because of the fact Eric was engaged to be married. As much as I wanted him and Kate to confess their love for each other, I didn't want him to cheat on his fiancé. Thankfully that does not happen. It is a really fun book to read. The mishaps that happen to everyone. I cheered with them. I wanted to hug Kate while her heart was breaking (...again). And I wanted to eat all of the cakes Kate and Jess made. Just how does one make a red velvet cake look blue?
Now I'm craving some cake...﻿
Posted by CrystalBee at 3:00 AM