More Than A Playboy & More Than Friends by Monique DeVere 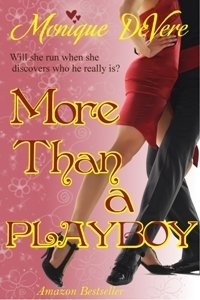 Published: February 6, 2013 (2nd edition)
Format: eBook only
Source: Amazon
Some rules are meant to be broken!

Serious-minded Alexandra (Sandy) Donovan has one unbreakable rule—never fall for a rich playboy. She’s seen the pain it caused her mother, how it ruined her childhood, and she’s determined never to let the same thing happen to her.

Unfortunately, the only man to make her hormones sit up and take notice is a rich playboy who doesn’t know the first thing about taking life seriously.

A lonely miserable childhood has taught Cameron Berkeley-Scott to hide his feelings in humour, but his comic nature seems to be pushing away the one woman he wants to draw near. She thinks he’s a playboy—a title he has no desire to have—and she ignores his outrageous flirting.

Now it’s time for Cameron to show Sandy he isn’t all about seeking life’s pleasures without commitment or responsibilities, but will it push her further away when she finds out who he really is? 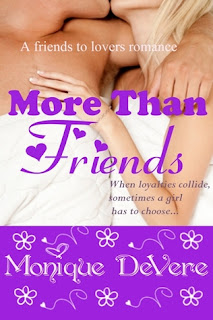 What do you do when your best friend’s fella dumps her?

You get drunk, catch a cab to his place, offer to bop him on the nose, then... sleep with him?

Lily Harper should have taken her secret attraction to Justin Knight into consideration before rushing to his swanky apartment. Now she’s caught in a dilemma. Lose her best friend, or the out-of-this-world sexy guy who could be The One.

Justin fell for Lily almost from the moment he met her, but she was with someone else and he'd just started seeing her best friend. Now Lily is available, and so is he, only, he isn’t having much luck making her see that sometimes when loyalties collide, a girl has to choose love!


* * * * * * * * ﻿
Just a super quick post today for these two super quick novellas by Monique DeVere. This is such a fun author to read. Her characters are loveable and the stories are adorably funny. I read "More Than Friends" first last year and squealed for joy when I found "More Than a Playboy" free on Amazon last week. Actual squeal...a little scary. "More Than a Playboy" wasn't my favorite of her novellas. I thought the story was a little too rushed. Would have loved a scene between the confrontation between Cameron and Sandy at the ball and when Sandy finally goes to see Cameron weeks later. Something to show that both of them are suffering from not being with each other. On the other hand, I loved "More Than Friends." It is quick, but I thought it moved a long at a good pace and had enough time for a resolution.
If you need quick, but adorable summer beach reads, give Monique's books a shot. I've loved all of them so far.﻿