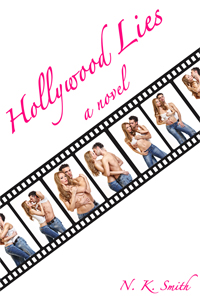 In a world where make believe is a multibillion dollar industry, it’s hard to know where the fantasy ends and real life begins. When Collette Stroud, an influential Hollywood actor and director, takes a chance on two young actors for her romantic teen movie, three lives converge in a complicated web of publicity, passion, lust, and lies.

The web is cast when Stroud, a woman with a few skeletons in her closet, hires two young artists in her low-budget film. She handpicks Liliana Addison and Devon Maddox to be Hollywood’s next big stars. Former child star Liliana has had limited success with her previous roles but hopes to take the world by storm under Collette’s tutelage. While Devon is an out of work actor, he never stops dreaming about making it big. The director’s interest in him assures Devon his dreams are about to become reality.

Sparks between Collette and Devon set their lives ablaze, but the studio has other plans. Executives concoct a fictitious romance in order to drive box office sales and launch careers between Devon and Liliana. When the studio offers to make the young actors into bona fide stars, will the price be too high to pay, or will the deal be too sweet to pass up?

Can the trio handle the pressure of a hidden romance coupled with a phony public relationship? Will love be enough to conquer the promise of fame, fortune, and a lasting legacy, or will it be an easy sacrifice?

All three will tread the thin line of Hollywood Lies and genuine passion on the most important red carpet walk of their lives.

Those are words that I think best describe Hollywood Lies. When I read the synopsis, I wasn't sure if I would like this one. Honestly, it sounds like something you'd read about in a newsstand magazine that specializes in torrid Hollywood affairs. It didn't take long to realize that Hollywood Lies is a complex story of three actors and how their world is turned upside down. All in the name of good publicity.

As I started to read Hollywood Lies, it felt like it was almost two books in one pretty package. The first book is the romance between Devon and every other female. His brief romance with Julie was hot. His not-so-brief romance with Collette was hot, but they were on a different level. His "romance" with Liliana was dysfunction and hot. Everything Devon did was hot. :o) Picture for favorite young actor and that can be your Devon. I'd watch any movie he was in. Yum...

Wait, where was I going with this? I swear I had a point...

Oh yeah, that was the romance aspect of Hollywood Lies. The second aspect of Hollywood Lies focuses more on the "lies" and how the pressure of fame and being the public eye can affect an actor. Although this is a fictional tale of three characters, I felt there was real depth behind the walls these characters built. It was almost as if I could pick any popular actor or actress and imagine them in the shoes of Devon and Liliana knowing that at some point in their career, they had to have felt the same. It was this aspect of the book that had me reading for more. As a romance junkie, I loved the romantic/sexy scenes in the book, but it was the meat of the story that really sets Hollywood Lies a part from other books.

The characters in Hollywood Lies dragged me through the wringer. The emotional rollercoaster they set me on wore me out. While some connection with every character, I didn't love them all. Devon... There were times when I wanted to give him an encouraging pat on the back and there were times when I wanted to shake sense into him. I wanted to hold his hand as he stumbled along, but slap him during most of his scenes with Liliana. Collette... I wanted her to stand up for herself. More than anything, I wanted her to just wake up and realize that she is a strong woman. I wanted her to shout "This is me and if you don't like it, tough shit!" Liliana... I didn't care for her at the beginning of the book for the sheer fact that we don't see much of her. It isn't until about midway through the book that we really get to know her. I feel that she could be viewed in two ways. She's either the "villain" that keeps Devon and Collette from each other or she's a "not-so-innocent" bystander caught in the web of lies. She was a fascinating character and I thought she embodied what could go wrong with young actors/actresses when fame goes to their heads. I was torn between thinking she was a victim of Hollywood or simply enamored with the attention. Either way, I would love to read what happens to her after the end of Hollywood Lies.

The emotional rollercoaster Hollywood Lies took me on made my head spin. I loved this book. I needed a small break from reading once I finished it. It was my first book by the author and I know it will not be my last. Kudos to N.K. for writing such a fascinating (and sexy) tale of three actors that get caught in Hollywood's web of lies.
Posted by CrystalBee at 3:00 AM