Bounty for Love by A.J. Wiliams 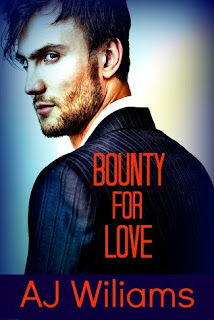 Alek Kairis is a man on a mission to keep those around him safe from the dangers of a lurking dirty cop. But, before he can protect everyone, Alek learns of a deep secret that could not just change his life, but change his ability to protect those around him.

Tess Michaels only wanted her brother’s safety; she did not realize that she too would be placed in danger. Yet, the danger that is following her is not the only threat she faces. When she learns the truth of who her son’s father is, not only will her life change, but so will her child’s.

Once the truth comes out, there is no going back for Alek or Tess. What’s worse is that their ever-growing attraction is a distraction that neither of them need. Can Tess and Alek work together, or will danger and secrets tear them apart forever?

After the dust (and glass) settle at Sloan's Bonds and Bounty, it doesn't take long for Alek to realize that the woman he's protecting is the woman he had a hot moment with last year. To his dismay, it takes her a bit longer. When Tess drops a 2 month old bombshell on him, Alek is bound and determined to not only keep them safe, but also keep them in his life forever.

A.J. Wiliams has struck gold again with the 3rd installment of her Bounty for Hire series. This book is the story of what happened to Alek and Tess after all hell broke loose in the 1st book. While Keylee went off to find Hunter, Alek took is upon himself to protect Tess from Detective Dixon. I loved Alek since the first book. As a character, he is very determined. Determined to protect his friends and now he's determined to protect his family. We haven't seen Tess much since the first book, but she is also a strong character. These two butted heads more than any other two characters I've read. Once Alek's knows the truth, he just steamrolls his way into Tess and her son's life. I loved the scene in her apartment and she tells him to pack some her the baby's things. Much like a man, he loses and takes everything. He is a force to be reckoned with.

The aspect of Bounty for Love that I enjoyed the most is that is was the perfect transition book in the series. As a fan of the series, I was a little worried and hoped that the last book wouldn't be revisiting the same topic. This is why I absolutely loved the last 2 or 3 chapters of the book. It wrapped up Dixon and left the reader with a tiny cliffhanger leading into Jefferson's book. I also liked the fact that Bounty for Love focused more on the relationship between Tess and Alek. As a couple, they have an uphill battle to climb and I'm relieved that A.J. didn't have them jump into bed right away. She forced them to work on the relationship first. Each of the couples in the series have different circumstances surrounding them. Keylee and Hunter are thrown together under intense pressure and they find being together almost calming to them. Meanwhile Thomas and Wen from the 2nd book have known each other the longest so they already have a built-in history. With Alek and Tess, they have one night together that forever changes their lives. Although Tess has had time to adjust, Alek hasn't and it shows in his actions as he steamrolls himself into her life. He still gives Tess a little time to acclimate to him, but not a lot. I love the fact that each character and each couple is different. I cannot wait for Jefferson's story because I think it'll be the most explosive. And I'm hoping it is with Eva.

Oh, I almost forgot. Alek, dude, I have a bone to pick with you. Did you have to diss my Ducks? Like you said to Tess - those are fighting words! *wink*