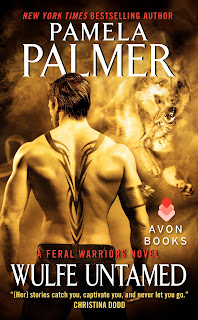 Wulfe knows the end-game is approaching.  The Mage are preparing to free the Daemon plague and Wulfe’s own small strain of Daemon heritage has been awakened. Worse yet, the beautiful human he once rescued needs saving again. Though Mage sentinels are the ones after Natalie Cash, Wulfe knows his heart is what she really should watch out for. He’ll do everything he can to protect her…and keep his distance. Running for her life while trying not to fall for this gentle, wounded warrior, Natalie’s world’s been turned upside down. But when the Mage begin to free the Daemons, it becomes clear that the Ferals’ only chance of defeating them is for Wulfe to use Natalie to harness the dark forces-and risk becoming evil in the process. The future of the world hangs in the balance, but can Wolfe endanger the woman he loves to save her?