Keeping Her by Kelly Lucille 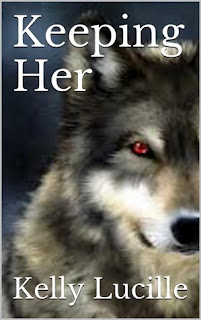 At 28, Clytie Persephone Jones has reinvented herself into exactly what she wants to be. She changed her name, put herself through school and is taking chances on a risky art career. She’s not looking for marriage; she doesn’t need anyone to run her life for her. What she yearns for is passion. She wants to burn under a mans touch. A lukewarm simmer won’t cut it. She’s holding out for the real thing.

Demon is a Wolf Shifter. A seven foot tall ex-Navy SEAL, with no name but his call sign. He was Outcast from his pack at fifteen and entered the Navy as soon as he was legal. Banding together with other outcast shifters and rogues for safety and the first real brotherhood he has known, He asks for nothing in life but the protection and solvency of his self-made “pack”.

Clytie is waiting for a blind date when she strikes up a conversation with Demon. Right away he is captured by her lack of fear and artifice, but she is so obviously a good girl and he is way out of her league sexually. Then Demon, being completely uncouth where women are concerned, says exactly the wrong thing and Clytie storms off cursing men in general and him in particular. Sure that he has nothing to lose and wanting badly to taste her, he grabs Clytie and forces a kiss on her. Everything changes when she kisses him back.

Neither of them expects the connection that flares so fast between them. Clytie wants time to get to know him. Demon figures he’ll just bring her right in to his home and bed and keep her there.
Can she deal with both the reality of an Alpha shape-shifter and the danger presented by Demons’ past?

He thought Claiming her was hard. Now he has to keep her safe.


❤ ❤ ❤ ❤ ❤
Well, this certainly seems to be the year of confessions and trying new genres. Late last year, I sunk my teeth into PNR (paranormal romance) for the first time with a vampire series. HA! Get it? Sunk my teeth... Never mind... I was a little hesitant to try a shape shifter romance for many reasons. Rabbit shifters? Nah, sex would be way too fast with them. Turtle shifter and you'd fall asleep before...ahem. I haven't seen too many bird shifters, but cat shifters and wolf shifters are popular. I can get behind the wolf shape shifter. Something about their possessiveness and sleek agility. Now that I'll try! So, I gathered my newly minted PNR fondness and read Keeping Her by Kelly Lucille.
Are you ready?
You sure?
Ok...
Holy crap! That. Was. HOT! Honestly, I don't know where to start. First off, I love a hot Navy SEAL. Muscles unbound! Second, I love a strong heroine. One that knows when to shut up and when to kick some major ass. Last, I love a good romance where the hero and heroine can't keep their paws off each other. Demon wants Clytie from the moment he spots her at the bar and immediately stakes his claim. He hates it when she flirts with his buddies and when she decides she's had enough of him? Oh hell no, he is not about to let her walk away. His possessiveness for Clytie was fan-freaking-tastic. Clytie, on the other hand, is a very strong female. She wants a one night stand, but nothing else. She ends up fighting Demon tooth and nail for her freedom, but when she decides that she wants this relationship after all, she becomes just as possessive for him. They are a match made in shifter heaven. I don't know if Ms. Lucille has been able to convert me quite yet, but I cannot wait to pick up the second book in the series (which just came out). If it is anything like this one, I may need a fan to cool myself off.
Posted by CrystalBee at 3:00 AM