Louder than Love by Jessica Topper 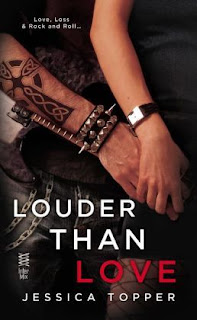 In this powerful debut novel, a young librarian grieves the loss of her husband...and discovers a love that defies classification.

It's been over three years since a train accident made a widow of Katrina Lewis, sending her and her young daughter Abbey back to the suburban town of her youth...the only place that still makes sense. Lauder Lake is the perfect place to hide and heal.

Recluse rocker Adrian "Digger" Graves survived the implosion of his music career, but his muse has long lain dormant. Until Kat hires him to play at her library—not on the basis of his hard rock credentials but rather, because of the obscure kids' TV jingle he wrote years ago. In a case of mistaken identity, Adrian stumbles into the lives of Kat and her comically lovable daughter.

Using tattoos as a timeline, Adrian unfurls his life for Kat. But as the courtship intensifies, it's unclear whose past looms larger: the widow's or the rocker's. Will their demons ever rest, or will they break these soul mates apart?


❤ ❤ ❤ ❤ ❤
Wow. Yeah, I'm not sure where to begin with this one. I guess I'll drive right in and give you a bit of a background. Grab some popcorn because this book was a doozy.
In September of 2001, Katrina Lewis' life changed drastically. She was the wife to Pete and mother to baby Abbey. Her life was perfect. She was happily in love. The whole world was in front of the three of them. Then it happened. Everyone called it an accident. Katrina knew differently. It was a wreck. It started like any other day. Katrina and Pete went about their day like normal. Taking the train into New York City. Stopping for coffee. Sharing a quick kiss goodbye and went their separate ways. That was the last time Katrina saw her husband alive. Unable to face their beloved Manhattan (which would face their own devastation the day after the wreck), newly widowed Katrina and her young daughter returned to her hometown. Three years pass in a fog of friends and family. Fate would bring Katrina another curveball into her life in the form of Adrian Graves. Together, Katrina and Adrian embark on a romance of love and healing.
Phew! This book was quite a rollercoaster. I had so many mixed feelings about it. The beginning, especially Katrina's flashback of Pete's death, left me in tears. Then as I got through about half of the book, I nearly DNF'd it for a couple reasons. The middle portion of the book was a little slow for me. Once I got past it (roughly 60%), I started to enjoy it again and finished it in a couple hours. Looking back at the book, I'm glad I didn't give up.
I had a big case of love/hate with the characters. The three main characters are Katrina, Abbey, and Adrian. I adored them. Katrina broke my heart to pieces. The poor woman was stuck in her grieving process. Instead of moving forward, she moved 10 steps back. She deeply depended on her friends and family for support. But who wouldn't after such a loss? As for Abbey. She is far older than her age. She's a bright little girl that can kick butt. I loved the short scene of Abbey taking karate lessons. Adrian was a washed up rock star. He's got so many demons, they don't fit in his closet. I would have loved to read his POV on the story. He's a fish out of water in Katrina's life. I loved watching the three of them grow closer and slowly become a new family. Their road will be a bumpy one, but they are strong and I have faith that they'll make it.
As much as I loved the main characters, I had mixed reactions towards the secondary characters. With the exception of Marissa and her husband, I hated all of Katrina's friends. Marissa and Rob were the only ones that were truly there for Katrina. As for the rest of them - BLECH! Karen was okay. We don't see much of her, but I didn't mind what I did see. Liz was a bitch that tried to steal someone's husband. The husband that she tried to steal was an ass. When I got to this portion of the book, I was on the edge of DNF'ing the book. Leanna and her husband were okay. They have issues that I think would make for an interesting sequel. Overall, I thought there was too much focus on Katrina's friends. Yeah, they are a big part of her life, but I think they went way overboard. Especially in a bon fire scene. Seriously, who plays strip truth or dare with friends and spouses? Yeah, no thanks. I loved Katrina's in-laws. The relationship she had with Pete's family was wonderful.
There were several aspects of the book that I absolutely loved. Katrina's flashbacks to Pete's death and her subsequent dreams of them after she starts dating Adrian were brilliantly written. They were beautifully sad. Going in to the book I knew she was a widow, but the clarity of those chapters stole my heart. I was on the verge of tears. There was a scene that seemed so simple, but yet very profound when Katrina realizes that her feelings for Adrian are far deeper than she thought. She has a dream of Pete and he sets her free. Free to fall in love again. Free to live her life again. Such a beautiful scene that I almost overlooked. There are several telling scenes like this one all throughout the book.
I'm sorry that this review is so long, but this story warrants it. There is a lot going on in this one and I think you'll either love it hate it. I didn't like having to trudge along during the middle portion of the book, but I'm so glad I didn't give up. This book is a gem. Rather than focusing on the sex between Adrian and Katrina, it focuses on the gradual love between them. When I finished the book, this phrase came to mind - Its a beautifully sad story about love lost, love found, and love redeemed.

All this from a debut novel. Bravo, Ms. Topper. I can't wait to see what you've got next.