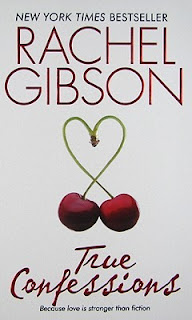 Up next is probably Gibson's kookiest books...

Welcome to Gospel, Idaho where everyone knows that there are two universal truths. First, God did His best work when He created the Sawtooth Wilderness Area. Second, every sin known to heaven and earth -- from the hole in the ozone to alien abductions -- is all California's fault. This is the story of what happened when a Californian came to visit...

L.A. based tabloid reporter Hope Spencer has come to Gospel hoping for inspiration. Well, she gets inspiration...Hope has never met anyone quite like the resident of Gospel. From the Dean sisters with their color-coordinated hair to the toilet-tossing sportsmen...to the murder victim whose body had been found in her house years before. She discovers that really is stranger than fiction -- even tabloid fiction!

And then there is local sheriff Dylan Taber. He is no made-up character from one of her stories. Dylan is all too real...and soon Hope is forced to face the awful truth -- she's been too long without a man. But once she gets wind of a Hollywood actress somehow mixed up Dylan's life, Hope realizes that if they are to have a future together, he has some true confessing to do.

I can't believe I'm about to say this, but I think I enjoyed reading True Confessions the first time more than I enjoyed it this time. Sorry!

Rachel Gibson has a knack for creating Small Town, U.S.A. with the craziest citizens. I don't know how she does it. This time she introduces readers to Gospel, Idaho, which will later play host to The Trouble with Valentine's Day. While I was reading True Confessions this time around, I noticed a couple things I didn't see the first time. This is going to sound weird...but...I loved Hope and I loved Dylan, but I didn't like Hope and Dylan together. Does that make sense? Hope is a strong woman that has had to deal with a lot in her past, mostly a failed marriage because of an illness. Dylan is a fantastic single father. He hates sharing his son with the mom, but he makes it work. Leading up to Hope and Dylan hooking up, I loved the shimmering hotness between them (especially Dylan - yum!). I didn't like the amount of lying and covering up that went on between them once they were together. He didn't want the town to know and she kept lying about her career. Of course, all the secrets come to bite them in the ass.

In the end, it was still a cute, quirky Rachel Gibson book and as usual, I loved a lot of things about it. I loved the setting of Gospel. I love the characters (most of which we'll meet again). I just didn't like how Hope and Dylan acted when they were together. They're hot, but with too many secrets between them that'll end up bringing them apart. As with all Gibson books, I still really enjoyed True Confessions. I'm glad I was able to re-read it again since its one of the many I haven't picked up in years.


❤ ❤ ❤ ❤ ❤
I'm going to be jumping ahead again next week and read Rachel's newest book, Run to You. EEK! I can't wait to break into it.
❤ ❤ ❤ ❤ ❤
Don't forget about my current giveaway for copies of Rachel Gibson's Simply Irresistible and See Jane Score. Enter by filling out the Rafflecopter below. It is only open to U.S. residents.
To earn the 10 extra entries, you must post on ALL of my T.G.P. posts (excluding #3.5). There will be at least 7 T.G.P. posts that will be published before the giveaway ends.