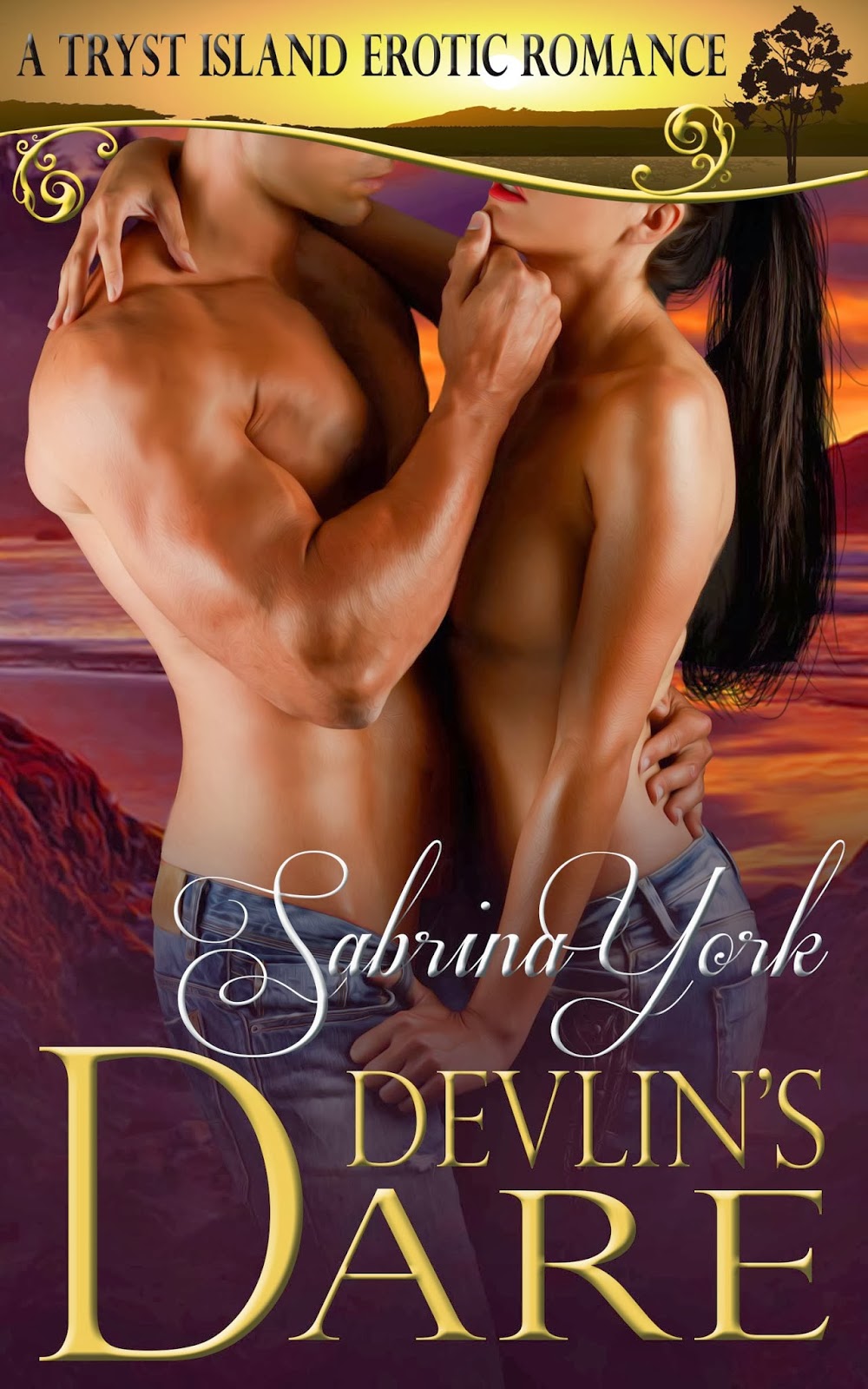 But Tara Romano doesn't “do” commitments. For good reason. When she proposes they be “friends with benefits,” Devlin can’t figure out why the idea annoys him so much. It should be the perfect scenario. A gorgeous, alluring woman who only wants him for his body… He wants, needs, more from Tara, so he hits upon a plan to turn their no-strings-fling into something lasting. A series of tantalizing dares—dares Tara cannot resist.

The fifth book in the Tryst Island series introduces Devlin Fox and Tara Romano. Devlin is one fine lookin' man. He's hot. He's sexy. He's sensitive. Wait, what? Yep! He's sensitive. He also has his eyes on Tara and refuses to take no for an answer. Tara, on the other hand, wants to avoid Devlin at all costs and plays a pretty mean trick on him. He's willing to pursue Tara until she succumbs to his advances, but its almost too much for Tara. As a commitment phobe, she knows that things are getting a little too cozy. Throughout the course of the story, not only do Tara and Devlin attempt to grow closer, they also learn more about themselves as their relationship deepens.

Devlin's Dare is a new twist on romance. Its not the usual storyline of boy meets girl, boy pursues girl but does so on the down low, girl pines for boy, girl and boy hook up, boy plays it cool... You get the idea. I loved that about this book. In Devlin's Dare, the roles have switched. Tara and Devlin don't have the typical characteristics of a new romance. Devlin pursues Tara until she gives in, but it was Tara to pull away and suggest they have a "friends with benefits" type relationship. Every man's dream right? Nope! He turns her down, which throws Tara for a loop. A hero that'll stand up for his relationship. *swoon* It was fantastic watching these two throw jabs at each other and essentially dare each other to give into their desires. I loved watching Tara boss Devlin around, especially during the scorching hot scenes. I loved watching Devlin second guessing himself and be a little bit more aware about what was going on around him. As it should be. *wink*

By reading any further, you are stating that you are at least 18 years of age. If you are under the age of 18, please exit this site.


“That’s Devlin Fox?” She glared across the restaurant. It wasn’t bad enough that the gorgeous guy she ran into on the ferry turned out to be friends with the douche in the ascot she’d been running from. No.
He had to be her worst enemy too.

“You know him?” Bella asked.

“He writes a Foodie Blog.” Tara glowered around the table, trying hard not to snarl. Or pout. “He gave Stud Muffin a bad review.”

Jamie shook her head. “Why did he do that?”

Tara crossed her arms over her chest. She’d spent her life learning her craft. Spent her life savings opening her own bakery. Spent years building clientele. Then, with one crappy review, business had tanked. Totally into the toilet. In one fell swoop, many of her regulars had stopped coming in.

She wasn’t sure she’d be able to make the bills this month, which was devastating.

And all because of him.

It was unfair for one man to have so much power.

And why had he panned her bakery? “Because I don’t have gluten-free.” She muttered, then added, under her breath, “Big baby.”

Still, gluten-free was a huge deal in Seattle. She’d spent the past week working up recipes. And fantasizing about wreaking vengeance on a certain blogger.

It had been a mere fantasy, until now. But now…

Kaitlin shifted closer, drawing Tara’s attention. “What are you thinking?” she asked in a whisper, her features tight.
Tara froze. It didn’t do to think around Kaitlin. Not that the elfin redhead read minds, or at least that’s what she claimed. But she seemed to know things.

“Nothing.” Tara made it a point to bat her lashes.

Kaitlin’s nose rumpled, as though she smelled something nasty. Like a lie.

But hell. Tara couldn’t tell Kaitlin what she was really thinking because Kaitlin—the sweet, innocent soul that
she was—would try to talk her out of it. Ramble on about Karma and shit.

No, Tara couldn’t tell anyone what she was really thinking about.

Because she was plotting revenge.

Devlin turned on the barstool, his trademark smile firmly in place. Everything within him froze. It was her. That little slice of heaven from the ferry. Damn. She was as hot as he remembered.

She sidled up next to him and the chatter of the bar receded. Fascination—and something else—rose.

He liked her scent, something floral and light. He liked her heat as she pressed against his side. She lowered her long lush lashes and peeped up at him through the fringe. Damn, that was sexy. She licked her lips. That was sexy too.

“I never got to thank you,” she purred.

“Th-Thank me?” Was that her hand? On his thigh?

“For saving me.” Her fingers flexed. “I would have tumbled to my death if you hadn’t grabbed me.”

“I doubt you would have tumbled to your death. Disfigurement, perhaps. Dire injury. But not death. Don’t exaggerate.”

She laughed, a low chortle. “Well… Thank you.” She leaned closer and whispered, “Can I buy you a drink?”

Devlin blinked. He’d been hit on in bars before, but no woman had ever offered to buy him a drink.

She signaled to the bartender.

He jumped a little as her hand skated up his thigh. His pulse skipped. “I…ah…yes. But what can I call you?”

He had a pretty good idea where this was headed, and he wanted to know what to cry out as he sank into her steamy depths. It was only polite to know a woman’s name at a moment like that.

She pursed her lips, as though she were thinking it over. Or thinking about something else. Her thumb snaked up. Nudged his balls, ever so lightly, and through thick denim, but he felt it like an electrical charge. “Call me Sugar.”

“Would you…like to go for a walk?”

“A walk?” His cock lurched. All thoughts of that drink faded.

She looked over her shoulder and then threaded her fingers in his, leading him toward the back of the bar.

He didn’t know why they weren’t heading for the front door, but didn’t much care.

She was a beautiful woman. She wanted him. And he was just drunk enough to follow her anywhere she led.

He shot a glance at Parker who sent him a thumbs up.

They barely made it out the back door of the bar before she kissed him. Damn. Backed him up against the wall, raked her fingers through his hair, pulled his head down and took his mouth.

And damn, she was a good kisser. She ate him with heat and passion and carnivorous zeal. He responded in kind, thrusting his tongue into her mouth. He nearly passed out when she sucked on it, nibbled it, toyed with it. He couldn’t help imagining her doing the same to his cock.

Her palm roved over his chest and made its way down to his hips. He didn’t dare move as she slowly teased the band of his jeans. She pulled back and held his gaze as she popped the snap.

“Mmm,” she murmured, reaching in. His eyes crossed as she molded his length. Squeezed. “Such a big boy.” She licked her lips and his brain short-circuited. When she went to her knees before him and blew a hot breath on him through the cotton of his briefs, he nearly lost consciousness. “I want to taste you,” she said. “Take off your pants.”

In a frenzy, he kicked off his shoes, and ripped off his jeans, hopping from one foot to the other. He held still, frozen in place, as she hooked her thumbs in his briefs and eased them down revealing his eager cock. She dragged his underwear down until they pooled at his ankles.

He heard the catch in her moan. Felt the trace of a warm finger around his swollen head and down to the base. He shuddered.

“Ah. Yes,” she said, coming close. Her heat caressed him. His knees knocked. She fisted him. Pumped. Once.

Twice. Blood pounded at his temples. Thrummed in his cock. She bent closer. Her damp breath kissed the head. “Such a big dick,” she said.

She released him and stood up in a rush. Her beautiful, seductive expression morphed into something bitter. He gaped at her, stunned.

“Yeah,” she said, propping her fists on her hips. “You, Devlin Fox, are a big dick.”

And then she left. Whirled on her heel and left him standing there, half-naked, leaning against the grimy brick wall behind a grungy bar.

And she took his jeans.

To celebrate the newest Tryst Island release, I've got a little giveaway for you. Up for grabs is a winner choice any of the five Tryst Island books: Rebound, Butterfly Kisses, Smoking Holt, Heart of Ash, OR Devlin's Dare. I will gift the winner their selection through Amazon. To enter, all you have to do is complete any of the truths or dares below. Are you up for the challenge? Devlin was... *wink*

Truths - worth 1 entry each (separate blog post for each answer please)
Dares - worth 2 entries each
There you go. I've got my answers, what are yours? To enter, you must be 18 years or older due to the nature of the book. This giveaway is open internationally. As long as I can gift you the book through Amazon, you can enter. The contest will be open for two days. I will pick the winner on Wednesday and they will have 24 hours to contact me. Good luck!