Once Upon A Masquerade by Tamara Hughes 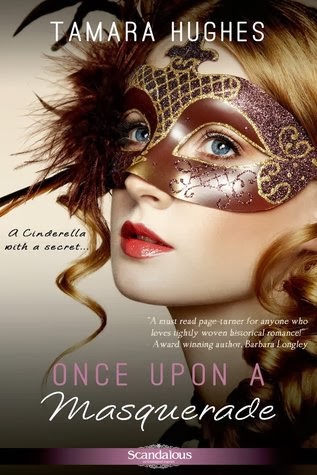 "If Victoria is any example, you should be rude, conceited, and a bit of a half-wit." - Mary


A Prince Charming meets his match...

Self-made shipping magnate Christopher Black first spies Rebecca Bailey at a masquerade ball and is captivated by her refreshing naivete and sparkling beauty. She's a stark contrast to the hollow behavior of the ton and the guile of his former fiancée, but the closer he gets to her secrets, the further she pushes him away.

A Cinderella with a secret...

Rebecca is drawn to the charismatic Christopher from the first, but she cannot risk him discovering that she is really a housemaid impersonating an heiress. Her father's life depends on it.

A Happily Ever After that could never be...

When Christopher's investigation of the murder of his best friend leads him straight to Rebecca, he fears his ingenue may be a femme fatale in disguise. Now he must decide if he can trust the woman he's come to love, or if her secrets will be his downfall.

Rebecca Bailey's day could not get any worse. Not only does she have to help her father raise $500 to pay off a gambling debt, she's also running late for work and she spills hot tea on the handsome Christopher Black. It doesn't stop there... Her fellow maid comes up with an ingenious plot to get the $500 - pretend to be a society lady and find a wealthy man to pay off the debt. With no other options, Rebecca reluctantly agrees. Christopher Black has his own mission - to find and protect his late best friend's mistress. His only clue? An elaborate hair comb given to the mysterious lady by Christopher's friend. A comb that is being worn by none other than Miss Rebecca. They are immediately attracted to each other, but much to Christopher's dismay, another gentleman is interested. Rebecca wants Christopher, but is afraid that he'll recognize her. Christopher wants Rebecca, but feels like he is disrespecting his best friend by falling for her. As they grow closer together, both are torn between finding the those who want to kill Rebecca and trying to protect themselves from falling in love.

Confession time: I love The Phantom of the Opera. My favorite song is, of course, Masquerade. So when I saw this title on Netgalley, my mind immediately went to the musical and the song got stuck in my head while I read Once Upon A Masquerade. This book was fantastic. I adored the characters. The main characters, Rebecca and Christopher, were wonderful. I loved the chemistry they shared. They were drawn towards each other from the moment Rebecca spilled tea on Christopher. My heart broke for Rebecca when she thought her father left her to die at the hands of a couple thugs. I loved Christopher loyalty towards his late friend and later towards Rebecca. They were perfect in this Cinderella inspired romance.

Great characters. A mixture of beautiful scenery with the dark side of society was fantastic. The story itself was well written with the perfect mixture of romance with light action. I cannot wait to read more from this debut author.