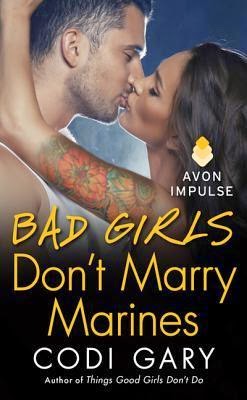 "Too friendly. I prefer girls who want absolutely nothing to do with me." - Justin Silverton

The bad girl who stole his heart …

Valerie Willis has done it all: tattoos, one-night stands, even strip poker. And now she can add getting a messy public divorce to that list. Back in her hometown of Rock Canyon, Val just wants to bury her head and wait for the scandal to pass. But when she suddenly finds herself at a singles' weekend face-to-face with former flame Justin Silverton, hiding from her heart—and the sexy Marine—won't be that simple.

Is just too good to let go …

It's been ten years since Justin kissed Val, but he still remembers the way they just seemed to … fit. Since then he's served his country and helped his father keep their ranch intact, but he's never forgotten Val or her wild ways. So when a twist of fate brings him the chance to chase her across state lines and spend a weekend winning her heart, Justin's all in. Because when he sees something he wants, he fights for it. And he's ready to fight for the right to call this bad girl his one and only.

The more I read Codi Gary's books, the more I want to live inside them. Not just because my chances of landing one of her adorably hot and irresistibly sweet heroes would greatly approve, but because I love the world she has created. I am a lover of small town romance where nothing escapes the rumor mill. As much as I would hate to be on Miss Know It All's radar, I do love the gossip she spreads. Why else would I want to live inside of her books? I love her characters. I've loved each Rock Canyon citizen that we've met so far. I want to be Gracie's best friend. I want to hang out at the local bar. In Bad Girls Don't Marry Marines, we meet Valerie and Justin, characters from two vastly different families with a history of sizzling chemistry. It takes one glance and Justin knows he wants Valerie in his life. The sheer determination to win her over has no boundaries and it takes a fated matchmaking weekend getaway for them to realize that this is it. I loved Valerie and Justin, both as individuals and as a couple. I loved Justin always coming to her rescue. Poor Valerie has been through a lot in the past and she needed someone to stand in her corner. She's an incredibly strong individual for dealing with her father and ex-husband.  She's tired of people putting her down for mistakes from her rebellious teenage years and for doing something she didn't do. She finally finds the courage to stand up to her father and other naysayers and I applaud her. You go girl!

I know I say this often, but I can't wait for what Codi has in store for us next. She's teased us with the budding romance between Gracie and a certain bartender. She introduces three new characters that I would love to read their stories (Everett, Caroline, and Ellie). And of course, we need to find out who this Miss Know It All is. I've got my theories... Do you?

Val stood in front of her stove stirring in the powdered cheese packet of her mac and cheese while her English bulldog, Gus, sat at her feet, licking his monstrous chops.

“This is my lunch, Gus-man. Your belly is starting to drag.”

The dog whimpered and pawed at her with his short front leg, his brown eyes begging for her to share. She loved her dog, a gift from Cole for her twenty-third birthday, and she had fought hard to keep him during the divorce. Cole had wanted Gus for breeding but had finally relented when she’d let him have her Porsche. It was a silly car to have, especially in winter, and Gus was worth it. She’d had his sperm collected, since he did have champion lines, and neutered him.

She was just pouring the milk into the saucepan when there was a pounding on her front door and she sloshed it all over the counter.

Whoever it was, they were knocking so hard it was shaking the door of her comfortable little ranch house. It couldn’t compare to the huge mansion she’d lived in with Cole, but the house actually felt like a home and not a prison. She hurried to the door and swung it wide open, ready to give whoever it was a piece of her mind.

Ellie stood on her doorstep with three suitcases and a woebegone expression. Val’s heart sank.

“Nothing, Dad’s just overreacting. Again.” Ellie hefted up one of the bags and gave Val her best pleading look. “Can I stay with you for a while? Please?”

Val groaned and leaned her head against the doorjamb. She loved her sister, but she was five years younger than Val, and instead of going off to college somewhere, she’d decided to just take classes at the local junior college, where she was barely passing and spent more time skipping class than going. Her friends were the troublemakers in town, and Val did not want them coming over all the time, wrecking her house and pissing her off.

“Come on, Val, it’s freezing,” Ellie whined, making her usual dark beauty dim a little in Val’s mind. Her sister had definitely gotten their mother’s body, with curves to make a man sweat, but she wasn’t as mature as she looked.

“Rule number one: pick up after yourself. I am not a maid.”

“Fine. Sure. Hurry up,” Ellie pleaded, hopping from one UGG-booted foot to the other.

“Number two: your little friends are not allowed in the house when I’m not here.”

“God, you really need to get laid,” Ellie said, but when Val started to shut the door, she yelled, “I’m sorry, I’m sorry! Yes! No friends over when you aren’t home.”

Val stepped back and Ellie started dragging her bags in, kissing Val’s cheek on her way. As she started down the hallway, Val remembered one last thing. “And no men in this house. This is a man-free zone.”

Her sister muttered something Val couldn’t hear, but she let it go. Her sister could think she was being an uptight prude all she wanted, but Val believed her attitude was more about self-preservation.

Looking down into Gus’s smushed face, she frowned. “Did I make the right choice?”

Gus growled, and Val had to agree with him.

An obsessive bookworm, Codi Gary likes to write sexy small-town contemporary romances with humor, grand gestures, and blush-worthy moments. When she's not writing, she can be found reading her favorite authors, squealing over her must-watch shows, and playing with her children. She lives in Idaho with her family.  If you’d like to learn more about Codi and her books, please visit her website, and feel free to follow her on Facebook, Twitter, and Goodreads.