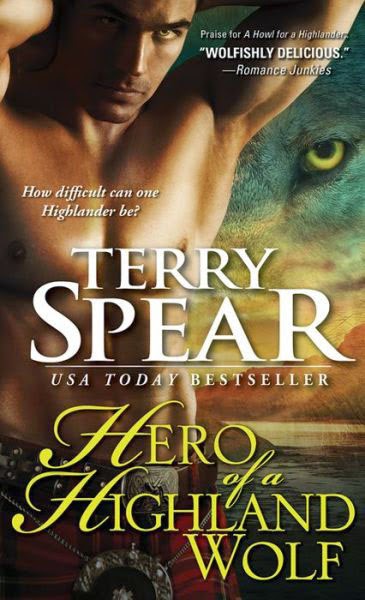 Welcome to a book and giveaway blast for Terry Spear's Hero of a Highland Wolf, available August 5th. In the meantime, scroll down to the end of this post to enter Terry's AMAZING giveaway! Good luck!!

The MacQuarrie werewolf clan has overseen the Playfair family’s Ardmore Castle for three centuries. So when a Playfair granddaughter from abroad inherits the estate, clan chief Grant MacQuarrie has to train her to manage it—and he’s not happy about having her in his way. Until the prim old lady he’s expecting turns out to be a sexy young wolf…

Colleen Playfair is excited and apprehensive about her new role at the castle, and she has big plans to change the way its run. But the stubborn Grant won’t make things easy, and she’s forced to turn to seduction to get her way…

Grant always joked and played with his clansmen when they were through with their work for the day. Well, even while they worked. But being with Colleen here like this felt different. For a moment, he didn’t feel like he served as the manager of her estates while she was the owner and taskmaster. He felt like a man with a woman on a Sunday jaunt in the glen. Except she wasn’t just any woman. She was a she-wolf, her cute little arse jiggling ahead of him as he climbed the hill to join her.

When he reached the top, she was trying to catch her breath and swayed a little. He grabbed her arm, and he didn’t know what came over him. But suddenly he was looking down into her smiling face, as if she was smiling at him, and he wanted in the worst way to kiss her.

She didn’t pull away from him, either.

He shouldn’t kiss her, but damn, he wanted to.

Still breathing hard, her heart beating fast, she placed her hand on his chest. He expected her to push him away, but she didn’t. She just stood there looking up at him, waiting for him to do something. He breathed in her scent, all woman and…interested.

They stood high on top of the hill overlooking the glen, the water rushing by, the sheep grazing on the green grass across the burn, and white clouds passing overhead against the blue sky.

He still had hold of her arm, but then he released her, cupped her face with both hands, and kissed her.

When his lips met hers, he knew he shouldn’t do this. He intended to make it sweet and unassuming, to quench some damnable need that he had to satisfy. He didn’t presume it would go anywhere, and he almost imagined it would be lame and unappealing—-after having built up the expectation that kissing that sweet mouth of hers would make his world spin and topple over. He hadn’t thought she’d crave the intimacy as much as he did. Yet when she wrapped her arms around his neck and kissed him back, she exhibited an eagerness that turned his world on end.

She was more than willing.