Review of BOMBSHELL by Jody Gehrman 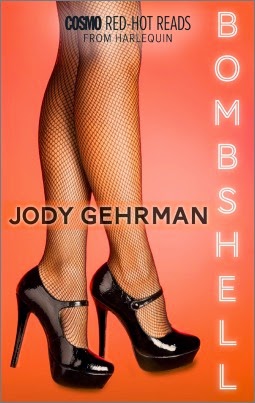 Copywriter Ruby Sugars is in a rut. Her life consists of the following: long hours, boring neutral colors and regular fat-shaming from her stick insect-looking boss. But Ruby isn't really a Bland Betty—she's a complete Bettie Page hottie, with an enviable collection of vintage couture and very naughty vixen lingerie. Now if only she could channel that girl into her real life….

Cue Ruby's best friend, whose recent fixation is "fantasy matchmaking." She's decided that all Ruby needs is one night with a sexy, delectable man—one with a serious thing for curvy pinup girls. And "Lancer" is hot enough to make any girl's fantasy come true.

For one night, it's pure, X-rated hotness. But come the next morning, this brand-spankin'-new bombshell will get the shock of her life when the man she vowed to see only once shows up again…as her new boss.

Bombshell is a wickedly delicious foray into the fantasy world of Ruby Sugars. In the corporate world, Ruby is forced into the side of her that everyone sees. She's boring and conforming. She's constantly told by her super skinny and bitchy boss that she's a failure. Instead of standing out, she uses her wardrobe as a way to hid her body from her coworker's scrutiny. Then there is Bettie. As Ruby's inner vixen, Bettie is the side of her that only her best friend has seen. Bettie is very va-va-voom. She's sexy and sultry and can get any man she wants. Well, she would if Ruby felt comfortable  enough to wear the clothes in public. So when Ruby accidentally emails her coworkers racy photos of herself, she's ready to push Bettie even deeper in her closet. That is, until her best friend sets Ruby up with "Lancer." Ruby is finally able to be herself with him and together, they explore their most intimate sexual fantasies. But when "Lancer" steps out of Ruby's fantasy and right into her real life, all bets are off . Suddenly Ruby is not only fighting for her job, but she is also fighting for Bettie.

I adored this little novella and because I liked it so much, it was inevitable that I wished it was longer. The build-up towards Lancer's and Bettie's one night together was amazing. I loved their shy flirting and getting to know each other. I loved how Bettie took charge in the bedroom. As part of her fantasy, Ruby wanted to be a woman in charge of her sexuality and she capitalized on that with Lancer. What I would have loved was more interaction between Ruby and Colin as themselves. Not necessarily sexual, but I wanted to how their relationship progressed outside of their fantasies. I just would have loved more. Still, I adored Bombshell. I thought it was hysterically funny and very sexy. I hope to read more of Jody's work in the future. Until then, let us all release our inner sex kittens.

Jody is the author of nine published novels, one novella, and numerous scripts for the stage and screen. She grew up in Northern California. Babe in Boyland, published by Penguin's Dial books, was optioned by Disney. Her plays have been produced in Ashland, New York, San Francisco and L.A. She and her partner David Wolf won the New Generation Playwrights Award for their one-act, Jake Savage, Jungle P.I. She's a graduate of UC Santa Cruz, Western Washington University, and University of Sounthern California. She's currently a professor of English and Communications at Mendocino College.