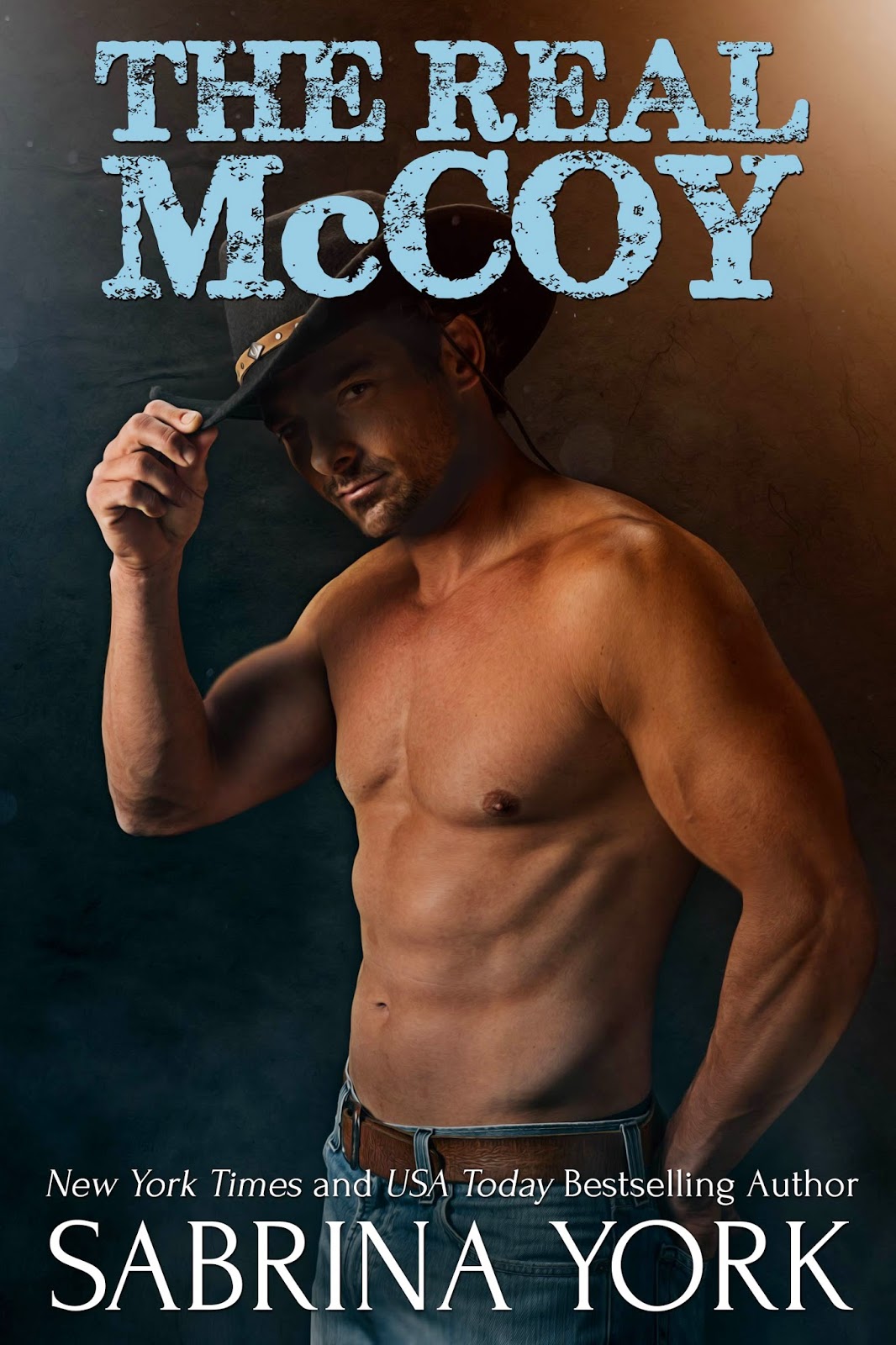 When Crystal Wilson gets roped into a wild, girls-only weekend at a rowdy “stud” ranch, the last thing she wants to do is tangle with a bunch of half-naked men pretending to be cowboys. But when she meets Ford McCoy, she can’t help but be attracted to his dark, dominant, gruff appeal.

What she doesn’t know is that Ford isn’t a stripper. He’s her friend’s overprotective brother, there to make sure his little sister doesn’t get into any trouble. She’s surprised at the passion that flares between them. In fact, what she has with Ford might just be what she’s been looking for all along.

It’s a pity the sexy rancher isn’t in the market for a city girl.

The Real McCoy... How do I love thee? Let me count the ways...
After reading The Real McCoy and I Am Not Your Cowboy (which I reviewed yesterday), I'll be picking up the Cowboy 12 Pack for sure. Sexy cowboys? Hello!

She shouldn’t have taken the shot.

For God’s sake, what had she been thinking? She’d been on a low-carb, low-calorie diet—with no alcohol—for a month. Not because Blaine had called her fat. That had nothing to do with it. She just wanted… She just wanted to do it for herself. Yeah.

But it would be awesome to run into him somewhere, say the bank or the coffee shop or that bar on Grill Street, looking like a vixen. She only had ten pounds to go to hit vixen weight. It was a helluva ten pounds. They didn’t seem to want to budge.

And damn, she really wanted something to eat.

And damn, the tequila had hit her hard.

So hard she’d left the weekend kickoff party—although, to be honest, she’d wanted to leave since the pumping music and the grinding bodies and the strobing lights were starting to make her eyelid twitch. As down-home country as the bedrooms were at this ranch-slash-resort, they sure knew how to throw a bacchanal at night.

It was pleasanter out here behind the house, staring up at the stars and enjoying the kiss of a soft breeze. There were no sounds but the rustle of the leaves in the trees, the crickets and the occasional croak of a frog.

Her head hardly spun at all.

She leaned back and closed her eyes and imagined how amazing it would feel to be twenty-one again and interested in those kinds of men. To rub against a hard chest and feel his thickly muscled arms hold her close.

But none of those boys had ignited a flicker of interest in her. They’d all been rubbed smooth. Although several of them, and one in particular, had made it clear he wanted to dance for her.

It was a damn shame.

It would have been fun.

What kind of man would she want, if she wanted a man? Tall, for sure. Broad. Hard. Rough. Maybe a little wicked twinkle in his eye.

A door slammed to her right and her eyes flew open. She blinked as a man strode toward her through the shadows. Her heart lurched and the breath caught in her throat. Yes, her heart whispered. Yes. That was the kind of man she wanted.

He was big, and broad and roped with muscle. His stride was sure, determined and powerful. He wore boots that kicked up dust with every step, and chaps and even a Stetson. He had high cheekbones and a well-formed brow. His square chin was spattered with a dark shadow. His shirt was buttoned.

This guy could dance for her. No problem. She’d love to have him rub himself all over her—

His steps stalled as he caught sight of her.

“Well, hey there, cowboy,” she purred. It was probably the tequila purring, but he didn’t seem to care. He peered into the shadows.

She did him the favor of moving into the light. She liked that his nostrils flared and his throat worked. He touched the brim of his hat. “Ma’am.”

Sexy. This stripper knew how to play a role.

“The party’s already started.” She sidled up to him—again, the tequila; normally she would never sidle up to anybody—and put her hand on his chest. The muscles rippled in response and something inside her rippled as well. It was probably her womb. Crying out for a visitor.

It had been a while, after all.

She leaned closer, against him, and it was good. She nestled her nose in his beautiful neck and took a whiff. And daham, he smelled sinful. Wicked. Alluring.

“What is that fragrance?” she asked. She needed to know. Wanted to bathe in it.

He chuckled; the sound rumbled through her. “Soap.”

“Mmm. Yummy.” She scudded her palm over his chest, his thick arms and down to his trim waist. He held steady as she explored, staring at her through insanely thick lashes. It should be illegal for a man to have lashes like that. His features were locked and hard. A muscle ticked in his cheek. “You’re hard,” she murmured. Oh, God, he was.

“Yes, ma’am. I am.” This he said in a low purr, one that gave a sizzle of double entendre to the words.

Something cracked inside her. It was probably the remainder of her pickled restraint. He was the hottest man she’d ever seen, much less touched. His heat soaked into her and melted her, liquefied her.

She couldn’t stop her roving exploration and wouldn’t have anyway. Her hand drifted lower. His body tightened, his breath hitched as she reached his belt. And then she found him.

Her knees locked. Her pulse rocketed through her veins. Because Jesus God, he wasn’t just hard, he was rock hard.

“Nice.” A whisper, all she could manage. She gave him a little pump.

He hissed in a breath and said through his teeth, “Yeah. Nice.” His hand came to her waist. He stroked her bare skin beneath the hem of her tee. His calluses scraped her sanity.

“You are the most authentic of all of them,” she murmured, kissing his neck.

He grunted and pulled her closer, cupping her ass, measuring it with a squeeze. “Most authentic?”

“Of all the strippers.”

He stilled for a moment and she sensed he was about to pull away, which she could not allow. He was far too delicious to give up. So she nibbled his chin. She loved the bristles of his stubble. And he tasted…like a man. More man than she’d ever had.

She released her hold on him and pressed her hips against his, wrapped herself around him, hooking her leg around his. The feel of his body, hot and hard, plastered against hers from chest to groin, made her mouth water.

He allowed it, but then he did pull back. But it wasn’t far, and it was so he could stare down at her face, so she didn’t mind. His breath washed over her and she had the sudden compulsion to taste his mouth. Not a need or a whim. A compulsion.

“You think I’m the most authentic of all the strippers?” She had no idea why he was smiling, but she liked his smile. Especially the dent that appeared on his left cheek. Everything about him pushed each and every one of her buttons. They were rusty buttons, but he pushed them.

“You are. You really do it better than any of them. You sure look like a real cowboy. Baby, you could rope and tie me…”

She stroked his back, reveling in the bulge of his muscles as she made her way down to his ass, which she squeezed as well. “And you’re really well built.”

“I wouldn’t mind if you gave me a lap dance at all.”

His brow arched. It was a striking, manly brow. “Like to?”

She liked the tenor of his voice, despite the fact there was a laugh hidden in it. She raked her nails along the back of his neck and he shivered. So she walked her fingers into his hair, ignoring that she tipped his Stetson clean off.

God, his hair was soft. Dark curls. Silky and thick.

Their gazes locked. His smile faded. Tension hummed between them. Then she tugged his head down and took his lips.

Posted by CrystalBee at 2:31 PM