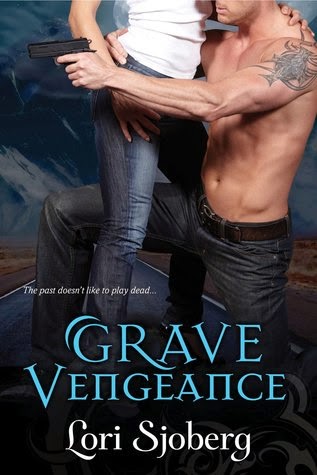 Handsome and haunted, he's a reaper who prefers to work alone. But Fate has other plans for him and the sassy secret agent who shot him in another life—if their pasts don't catch up with them first.

Dmitri Stavitsky has never played well with others—a Soviet KGB spy in life turned reaper after death, his work of bringing souls to the other side is best done alone. But orders from the top soon place him alongside fellow reaper Gwen Peterson, the American counter intelligence agent who took his life so many years ago.

Now, as a ghost from Gwen's past resurfaces with the power to steal reapers' souls, the two have no choice but to set aside their differences and apprehend the rogue together. But their cross-country mission soon ignites feelings Dmitri thought he was no longer capable of—for the woman who helped destroy him. With an ancient force and a small army against them, he'll have to let go of old grudges or risk his future with Gwen...as Fate hangs dangerously in the balance.

An uneasy silence fell between them. She darted a quick glance in his direction and saw the unwashed hostility darkening the blues of his eyes. The muscles along his jaw clenched and unclenched, his full lips pressed into a thin white line.

The light ahead switched from green to yellow. After checking for cops, she punched the gas to make it through the intersection before the yellow turned to red. “You know, I’m not happy about this either. The sooner we do whatever Samuel wants, the sooner we can go our separate ways.”

With a huff of annoyance, Dmitri rolled down the passenger side window and propped his arm on the sill. “Doesn’t mean I have to like it.”

For once, they were in perfect agreement.

About fifteen minutes later, they pulled into the long, narrow drive way leading to Dmitri’s home. Located in the outskirts of east Orlando, the house afforded him the privacy he coveted. He kept the exterior freshly painted, the lawn neatly trimmed, and NO TRESPASSING signs posted on the six-foot wooden fence lining the outer perimeter of the property.

A light was on inside the house, but it wasn’t the one he’d turned on before leaving. This one illuminated the main living area, and the change let him know there was someone inside. Samuel. No one else would have the balls to enter his home uninvited.

Samuel stood about ten feet away, staring intently at the aquarium in the living room. He was dressed in his usual three-piece suit, this one battleship gray. The handkerchief in his coat

pocket matched the deep blue tie around his neck. His posture was stiff, his head held high, his arms clasped behind his back. When he looked in their direction, his expression never lost its typical drollness. “You’re late.”

“Sorry,” Gwen said, even though she didn’t sound sorry in the least. She strode across the kitchen tiles and tossed the duffel bag on the counter. “Traffic.”

Funny, he’d expected her to blame him for their late arrival. If their positions were reversed, it was exactly what he would have done. Maybe it was her way of acting superior, or maybe she was actually trying to be nice. To him, it made no difference. He didn’t need her, didn’t want her, and was offended by her very presence in his home.

“Why is she here?” Dmitri demanded, not bothering to conceal his anger. He closed the door behind him and wiped his feet on the mat.

“Good evening to you too, Mr. Stavitsky.” Samuel’s British accent cut through the air with its usual piercing clarity. He frowned, tugged at the silver cuffs at his wrists.

Foreboding rolled off Samuel’s body and set Dmitri on edge. Nothing good ever came from a visit by the boss, and he suspected this would prove no different. He inhaled deeply, reined in his temper, and said in a much calmer voice, “Good evening. What is the purpose of your visit?”

Apparently appeased by his change in demeanor, Samuel relaxed. “I have an assignment for you both.”

Oh, this couldn’t be good. Dmitri shot a glance in Gwen’s direction and saw the tension along the corners of her eyes. Guess he wasn’t the only one unhappy with the prospect of working together.

Check out books 1 and 2 from Lori's Grave series...

Lori was a born a coal miner’s daughter. No wait, that’s not right. Actually, she was born a carpenter’s daughter. Her mother was a housewife/homemaker/stay-at-home mom – whatever the politically correct term is these days. Basically, she made sure Lori didn’t get into too much trouble, a task easier said than done.

Growing up the youngest of three girls, Lori never had control of the remote. (Not that she’s bitter about that. Really. Okay, maybe a little, but it’s not like she’s scarred for life or anything.) That meant a steady diet of science fiction and fantasy. Star Trek, Star Wars, Twilight Zone, Outer Limits – you name it, she watched it. It fed her imagination, and that came in handy when the hormones kicked in and she needed a creative excuse for being out past curfew.

After completing her first manuscript, she joined the Romance Writers of America and Central Florida Romance Writers. Now she exercises the analytical half of her brain at work, and the creative half writing paranormal romance. When she’s not doing either one of those, she’s usually spending time with her husband and children of the four-legged variety