Review of Safe At Last (Slow Burn #3) by Maya Banks 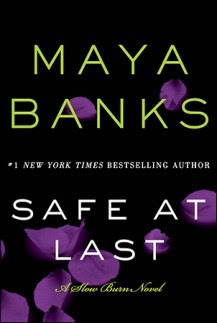 They say young love doesn’t last, but a girl from the wrong side of the tracks with unique abilities and the hometown golden boy were determined to defy the odds. For Zack Covington, Anna-Grace—his “Gracie”—was the one. Until one night forever alters the course of their future, when a devastated Gracie disappears without a trace, leaving Zack to agonize over what happened to the girl he loved. As the years pass, his desperate efforts to find her uncovered nothing.

Now working for Devereaux Security, he stumbles across a painting featuring a special place only he and Gracie would know. The image is too perfectly rendered for it to be coincidence. His Gracie must be alive. When he finally tracks her down, he is shocked—and heart-broken—to discover the wounded shell of the girl he once knew and still loves. Her psychic gifts are gone, and worse, she believes he betrayed her all those years ago.

Zack has enemies, and once his weakness is discovered, Gracie becomes a target for revenge. He’ll have to save her before he can earn her trust and her love. And he vows they’ll never be torn apart again.

I was a little nervous going into Safe At Last for two reasons. First of all, I had not read the previous books in the Slow Burn series and I wasn't sure if it would have any impact on my feelings towards Safe At Last. I had a feeling that the characters from the previous books would appear in this one, but beyond that, I wasn't sure. There is an underlying connection between the three books with a protagonist, but it isn't something that should confuse the reader. The second reason why I was nervous about starting Safe At Last was that I started it in the middle of a reading slump that I'm still fighting. It took a couple chapters for the book to lure me into the story. It had nothing to do with the book itself because I absolutely loved those beginning chapters. It was the freaking slump. Now that I've shared my experience reading Safe At Last, here are my thoughts...

Safe At Last was a slow building romantic suspense novel that chilled me to the bone. It was dark and disturbing at some points, two aspects of a romantic suspense book that I happen to enjoy. Zack is a troubled soul. After losing his Gracie in a mysterious disappearance, he spent the last twelve years searching for her. Now that she suddenly reappears in his life, he is desperate to know what happened. Why did she leave him? Why is she so damn scared of him? His heart breaks with every tear she sheds and he will get to the bottom of it if it is the last thing he does. After a horrific event that she believes Zack ordered, Gracie has been living in fear. Wounded, she hates that she's forced to relive the events that happened 16 years ago. In Zack's protection from an unknown threat, she learns the truth about what happened as Zack seeks for revenge against those that hurt her.

I will say this first - I really enjoyed Safe At Last and I'm hoping to go back and read the previous books in the Slow Burn series. However, Safe At Last felt as if it was a tale of two stories. The first "story" being the main romance between Zack and Gracie and his desperation to protect her. I loved that aspect of the book. Zack's desperation fueled my desire to not get up until I finished the book. I wanted him to set Gracie's fears at ease and get revenge on everyone that hurt her. It takes a long time for him to get past her defenses and rightfully so. What happened to her was unimaginable and I kind of wished she was able to get her own form of revenge. The second "story" is where I stumbled a little. By "story" I mean the main protagonist that I'm pretty sure appeared in at least one of the previous books. This group of people abducted and attacked Gracie to send Zack, Caleb, and Beau a message. I felt things could have been explained better. I had no clue who these people were and why they were doing what they were doing. While this does have quite a bit of page time, it felt as if there wasn't a whole lot of details given. Now I'm not sure that all of this wasn't explained in a previous book, but had it been fleshed out more, Safe At Last would have been a solid five star read for me.

All in all, I thoroughly enjoyed Safe At Last and would give it four stars. I loved the slow building elements with the second chance romance between Zack and Gracie. I enjoyed the suspense elements with both attacks on Gracie, I just wished it was fleshed out more. My absolute favorite part was the chemistry between two background characters. I'm hoping that there will either be a 4th book in the Slow Burn series or a spin-off so these two can have their own book. Please?