Spotlight & Excerpt from Summer at the Shore (Seashell Bay # 2) by V.K. Sykes 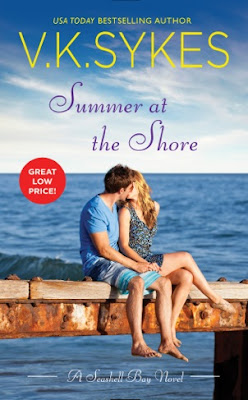 Morgan Merrifield sacrificed her teaching career to try to save her family's bed-and-breakfast and care for her younger sister. She can't let herself get distracted by Ryan Butler. After all, the rugged ex-Special Forces soldier is only in Seashell Bay for the summer. But her longtime crush soon flares into real desire-and with one irresistible kiss, she's swept away.

Ryan values his freedom. As much as he wants Morgan, he's not ready to settle down with anyone, much less in sleepy Seashell Bay. But his code of honor doesn't allow him to leave a woman in distress-and she's in desperate need of help to fix the inn. It only takes one day working under the same roof and Ryan is already hoping for a lifetime of hot summer nights . . .

“You look lovely today, Morgan,” Julia Butler said with a warm smile. “Your skin is always so beautiful.”

With her hair still wet from the dunk tank and with zero makeup, Morgan knew that wasn’t true. But Julia was the nicest person on the planet.

“Thanks, Mrs. Butler. We’re sure happy to have Ryan on the team this year.”

“If only he could be here all the time instead of gallivanting all over the world,” Julia said with a wistful sigh.

“Julia Butler, that is so much malarkey,” her husband said. “Our boy is fighting the good fight like he always does. And that’s a damn sight more important than catching people’s dinner.”

Julia wrinkled her nose at her husband, then smiled. “Don’t get me wrong, Morgan. I’m so proud of Ryan I could burst. But I just miss him so. Watching him get on that ferry and leave again is always the worst day of the year for me.”

Ryan wrapped his mother in a tight hug. “But I always come back, Mom. And I always will.”

Morgan was thrilled he had such a close, loving family, but the sweet exchange hit her like a punch in the stomach. God, she missed her parents. She would miss Ryan too, more than she cared to think about.

Fortunately, Micah blew his whistle before she could get too maudlin.

“Yes, time to get the lead out, people,” Miss Annie said as she bustled down the line, giving her team friendly pats on the butt. “Let’s wipe the grins off those smoke eaters’ faces.”

“Duty calls,” Ryan said. After he kissed his mom and got in position as anchor, his dad moved forward to take up his place near the head of the line.

When Ryan wrapped the end of the thick rope around his waist and let the remaining few feet trail behind him, Morgan shook her head. “You can’t wrap the rope around your waist. That’s not quite in keeping with the rules for the anchorman, dude.”

Ryan lifted an eyebrow. “Really? Well, you’re the pro.” He unwrapped the rope and handed it to her. “Show me,” he said in a deep, low voice that made it sound like he might want to do something far sexier with the rope than just play tug-of-war.

Oh, boy. Rope and Ryan Butler was not a combo she should be thinking about.

When she touched him, Morgan swore she could feel sparks—and a whole lot of glorious hard muscle.

“If you say so, boss lady,” he murmured. “But I figure there are plenty of other rules we can break.”

Morgan moved into position, hyperaware of his presence behind her. “Get your mind out of the gutter, anchorman,” she flung over her shoulder.

“Get your mind into the game, Ryan Butler,” Miss Annie scolded as she came down the line to them. “You too, Morgan Merrifield. Don’t think I don’t know what’s going on between you two.”

Morgan had to bite back a groan, but Ryan just chuckled at the reprimand.

Roy took a couple of steps forward as if to talk to Miss Annie but instead leaned in toward Aiden. “I got twenty-five bucks riding on you guys, so don’t let me down. That’s a lot of money to a senior citizen, sonny.”

Morgan knew Rocket Roy wouldn’t be the only islander who’d placed a bet on the outcome.

As Aiden reassured the old man, Morgan clutched the rope tightly and dug her feet as hard as she could into the short grass. She kept her eyes glued on Micah, standing off to the side and clearly about to whistle the start of the match.

“Your ass is seriously distracting me, Merrifield,” Ryan murmured in her ear. “If you had a dime in the back pocket of those jeans, I bet I could tell if it was heads or tails.”

Lord, help me. Morgan tried to ignore the little flutters in her stomach. “That excuse isn’t going to cut it if we lose, Soldier Boy,” she hissed, glancing back.

She didn’t know whether his amused grin infuriated or excited her. Both, she guessed.

When Micah blew the whistle, whoops and cheers erupted all around the field. “Pull!” yelled Miss Annie at the exact moment that Boone Cleary boomed out the same command to his team.

Morgan pulled on the rope with all her strength, but it felt like cement under her hands. Nothing moved either way as both teams strained for advantage. “Pull!” Miss Annie yelped again, trying to get their rhythm going.

Morgan kept her eyes fastened on Aiden’s back and strained at the rope.

“Come on you no-good Flynn boys, pull!” Miss Annie bellowed. For a little old lady, she had quite the set of pipes.

The crowd’s cheering seemed pretty evenly split, though Morgan was so focused on trying to maintain a solid grip on the rope that she was barely aware of more than a jumbled roar. When she looked down the line at the firefighters on the other side of the moat, she saw something that made her blink. She swore she could see genuine surprise on their faces, especially Brett’s. Those guys always figured they had the tug-of-war contest in the bag, but maybe not this time.

After a few tense moments, her team fell into a good rhythm, with Ryan and Aiden leading the way with huge pulls. At Miss Annie’s barked commands, each pull was followed by a barely perceptible moment of relaxation before another hard yank on the rope. While it felt to Morgan like she wasn’t doing much of the work, she knew it wasn’t true. A team couldn’t win the match without all eight pullers doing their jobs. She’d be damned if she would be the weakest link—not when they had a real shot at winning.

And especially not in front of Ryan.