Review of The Point (Point Vamp #1) by Victoria Blisse 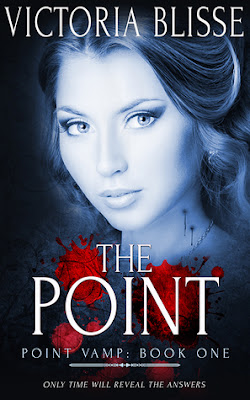 Love conquers all, that is the point but can it bridge the differences between a vampire and a woman?

Hugh is twenty eight. He has been twenty eight for nearly one hundred years. Hugh is a vampire. He owns a club called The Point and he pays girls to have sex with him. He then counts to ten as he sucks their blood to semi-satisfy his lust.

Elizabeth is a doctor, she loves her job but likes to escape into the countryside now and then. When she twists her ankle Hugh comes to her aid. He carries her curvy form all the way back to his home. He takes care of her ankle and the rest of her body too but he goes too far and sucks her perfectly intoxicating blood.

How can these two lovers have any kind of relationship? They don't know, only time will reveal the answers.

Publisher's Note: This book has previously been published under the same title by Totally Bound. It has been expanded, revised and re-edited for re-release.

Victoria Blisse's The Point left me with some mixed feelings. On one hand, I loved Hugh. For a short story, his character was surprisingly well developed. I loved learning about is progression over the years, from the moment he was changed to meeting Elizabeth. On the other hand, I felt very little connection to Elizabeth. I think if The Point was longer, not necessarily a full length book, and her character was developed a bit more, I would have liked her. Overall, I enjoyed The Point. I liked the darkness and grittiness of the story. It was sexy enough to hook my attention and leave me wanting to pick up the next book in the series.

Hugh needed more, and as he thrust inside the juicy cunt beneath him, he knew it wasn’t enough. She moaned as he continued to go through the motions. If it were up to him, he’d leave out the sex bit, but it was an essential part of the process. He rolled onto his side, carrying the waif-like girl with him. She laughed and squealed in shock, and he pulled her back down onto his cock. He pressed a practiced finger to the juncture of their bodies and rubbed. Soon, she screamed and bucked as her orgasm struck her.

Hugh grunted and groaned as if he’d come, ready now for the thrill he was really after. He pushed her back down onto the bed and off him. She giggled and gasped as he grabbed her long hair and twisted her neck to the side. She was still involved in her pleasure—he could feel the shockwaves of it passing through her body.

“No,” she gasped, but her fake fear rang hollow as he flicked out his sharpened teeth and plunged them into her jugular vein. 10, 9, 8… Very carefully he counted as he drank, the vitality of her fresh blood zinging through him. He didn’t let himself get lost in the ecstasy, though. When he thought the number one, he reluctantly ripped himself away. He would never get used to not draining a human but the slight discomfort of hunger not quite sated was better than the guilt of death.

He felt as if he’d been denied just on the brink of orgasm, but at least, his body buzzed with life even if he wasn’t full up. He took a wad of twenty pound notes from the pocket of his jacket beside the bed and gave it to the girl.

She smiled, her eyes still blissed out from the effect of the orgasm and the blood loss. Humans seemed to get some kind of thrill from the bite, a sexual pleasure that was as intense as the climax itself. He didn’t really understand why but maybe it was a defence mechanism. If a vampire was sucking your blood, you were about to die. Might as well go with a smile on your face rather than in abject fear.

“See you again, Hugh. You’re the best, you know that?” she said in a squeaky, well fucked tone, stuffing the money into her handbag, which had been discarded on the dark wood night stand.

“Thanks.” He pulled his mouth back into the semblance of a smile and pulled on his creased black trousers then buttoned his stiff white shirt. The blonde cleaned herself up and dabbed at the marks at her neck with a tissue. Hugh had offered to heal her, but she was one of those girls who liked to show off the marks to her friends. To show them she’d really been with a vampire. Hugh felt slightly bad that he didn’t know her name though he’d fucked and sucked her five times before. Hugh liked predictability and would pick the more experienced girls wherever he could, but never for more than a dozen times. He couldn’t risk getting attached.

He fastened his tie then shrugged on his long-lined suit jacket. “Goodbye,” he said and didn’t wait for an answer. He walked from the room, through his club, The Point, and out the front doors into the cold air of the night.

Hugh hated what he was but over the years had developed a way to cope with it.

Victoria Blisse is a mother, wife, Christian, Manchester United fan and award winning erotica author. She is also the editor of several Bigger Briefs collections, and the co-editor of the fabulous Smut Alfresco and Smut in the City and Smut by the Sea Anthologies.

She is equally at home behind a laptop or a cooker (She is TEB's resident "Naked Chef") and she loves to create stories, poems, cakes and biscuits that make people happy. She was born near Manchester, England and her northern English quirkiness shows through in all of her stories.

Passion, love and laughter fill her works, just as they fill her busy life.