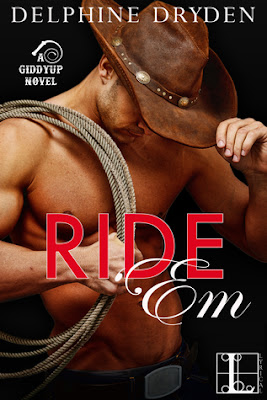 "I guess this would be a bad time to make a joke about how you wouldn't have pegged me at all." - Logan

SADDLE UP
Mindy has come to Logan’s dude ranch to convince him to sign away his land’s mineral rights to her stepfather. She doesn’t want to beg, but she will if she has to, like she does Friday nights when she submits to her master’s desire . . .

BUCKLE DOWN
Logan doesn’t like to be jerked around, in business or pleasure. And when he learns what Mindy is up to, he’s ready to teach her a lesson. In fact, he’d like to tie her up, strip her down, and give her a spanking she’ll never forget . . .

There were two things that initially drew my attention towards Ride 'Em, First of all, who can say no to that cover? Yum! Then, of course, there was the synopsis. A sexy rancher with a kinky side? A strong minded heroine that will only beg in the bedroom? Where do I sign up? What I didn't expect was to grin, laugh, and swoon throughout the whole book. I loved every moment of this story, from the author's witty writing to all of the lovable characters. As much as I loved Logan, Mindy, and the rest of their kinky friends, I'd have to say it was Robert that made me giggle the most. At it's core, this book was a great second chance romance with a bittersweet homecoming. For Logan, she was the popular cheerleader he never thought he had a chance with. So of course, he crushed on Mindy from a distance. Mindy is confused. When she should be homesick for Dallas, she realizes that her heart might belong in a town she couldn't wait to leave. Together they found a reason to fight for what they want - love and a kinky ranch to explore their wild side. Ride 'Em was a fun, sexy, and a hell of a good time. Sucks that we have to wait until March of next year for the second book. In the meantime, I'll just have to explore Delphine's other books.