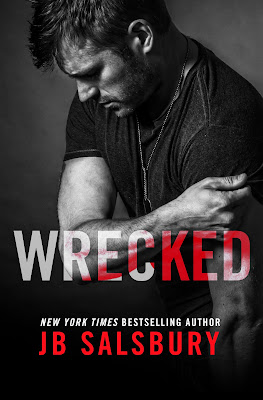 I don't think I've ever read a book whose title fit it so perfectly more than this one. Going into Wrecked, I knew it was going to an emotional book just by reading the blurb. Haunted ex-military hero? Check. Heroine that doesn't quite know her place in the world? Check. Two characters learning how to open themselves up to each other? Check! What I didn't know was that JB Salsbury was going to absolutely wreck me. I was up at all hours of the night getting my ugly cry on. These characters... JB's writing style... Everything sucked me in from the first page and held me hostage until the very end. Now I don't normally like characters that knowingly keep the truth from another character, but Sawyer's situation was unique. It was something she had to do in order to find herself. She spent so much of her life hidden in the shadows that she doesn't know how to live. And while she tries to make everyone else happy, it is slowly wearing her down until her sister steps in with the seemingly perfect solution. Of course, things don't go quite as planned and life threw her a curve ball in the shape of Aden. I loved Aden. The man is a tortured soul and I just wanted to gobble him up in a bear hug. He survived the worst and he too doesn't know how to live. Together, they healed each other's wounds. They were the rock, the emotional support needed to get through the darkest days. And I absolutely loved that.

Wrecked also made me laugh at some points, especially watching Sawyer out of her element in the water. Sometimes you gotta laugh through the tears and that's what the characters did. They found joy and laughter. As a reader, that made me smile and giggle. Amazing job by the author.

Wrecked was originally featured on Crystal Blogs Books as a release blitz. If you'd like to visit the blog post and read the excerpt, please follow the link below. 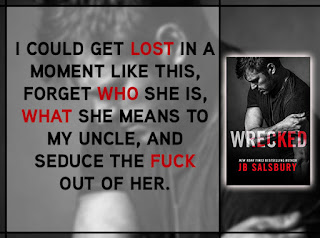