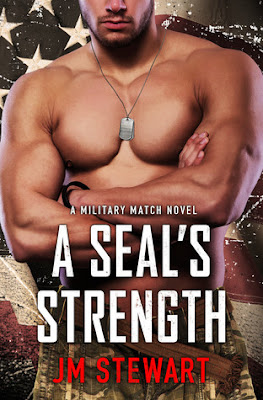 "Gabe Donovan, if you're thanking me for great sex I'm going to hit you." - Stephanie Mason

A sizzling new series about three friends looking for love-and the sexy SEALs who are ready to fulfill their craziest fantasies. This second chance was worth the wait . . .

As a SEAL, Gabriel Donovan did the toughest jobs imaginable without blinking an eye. But three years after his wife’s death, the idea of dating still makes him sick to his stomach. His daughter desperately needs a mother, though, and there’s nothing Gabe won’t do for his little girl.

Stephanie Mason doesn’t run from anything. Not even coming face to face with the “one that got away” on a blind date. Steph’s body vividly remembers every single thing about Gabe and while some things have changed, the way he makes her feel sure as hell hasn’t.

Gabe and Steph know that love comes with risks, but if they’re brave enough, this second chance might just bring them the love of a lifetime.

I am totally, 100 percent in love with this series. Each book brings a different level of friends-to-lovers romance that I'm enjoying the hell out of. In A SEAL's Strength we get a sexy as sin friends with benefits between Gabriel and Stephanie, two characters that are in different stages in their lives. Gabe is still reeling from his wife's death and isn't ready for anything series while Stephanie desperately wants someone to love her unconditionally. Don't mistake her desire for love as a weakness. Instead of tearing her down, it has made her a strong woman that can march on her own two feet towards something she wants. And of course there is the inevitable moment where both realize that the whole friends with benefits is turning into something more. I love those moments! I can't seem to get enough of JM Stewart's books. This is the second series that I've completely fallen for. This book was a fabulous way to spend a day reading. Plus now I'm on pins and needles for the next book, especially after a certain dare. Whoo baby, it's going to be a hot one!

J.M. Stewart is a coffee and chocolate addict who lives in the Pacific Northwest with her husband, two sons and two very spoiled dogs. She’s a hopeless romantic who believes everybody should have their happily ever after and has been devouring romance novels for as long as she can remember. Writing them has become her obsession.

Posted by CrystalBee at 8:51 PM