Review: Tell Me by Abigail Strom 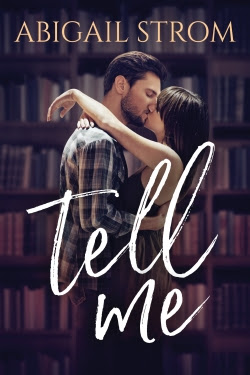 Shy bookstore owner Jane Finch grew up hiding in the margins of her own life while her vibrant, adventure-loving sister, Samantha, dominated every plotline. She’s made peace with it, unlike Sam’s business partner, Caleb, who’s always nudging Jane to go after what she really wants. Why should she care what blunt, brash Caleb thinks? They’ve never had much in common, except for Sam.

After tragedy strikes, they don’t even have that.

Caleb can’t quite remember when Sam’s little sister stopped being like a surrogate sibling to him and became just…Jane. She’s the most intriguing woman he’s ever met, and so much sexier and stronger than she thinks. On the emotional journey to honor Sam’s memory, the spark they’ve tried to deny becomes an inferno. This journey was meant to be an ending, but will they discover an unexpected new beginning?

I'm not sure what it was about Abigail Strom's Tell Me that initially grabbed my attention more... The cover or the heartbreaking blurb. I will say this though... I should not have read Tell Me right after finishing another emotionally raw romance. Just from reading the blurb, I knew I was in for a pretty heavy ride so reading it after being gutted emotionally by another book... Let's just say there was ugly crying involved with my fair share of tissues. Tell Me was a beautifully poignant story of love, heartbreak, and redemption. It follows two flawed, but oh-so lovable characters - Jane and Caleb. Two characters left reeling after a tragic event. Through the tears and the hurt, I loved watching them stumble along the way. My heart broke while Jane learned that there is not always a next time. Caleb learns this too, but it makes him stronger and is able to help Jane open her heart for him. He's no longer willing to denied his desire for her. My heart broke and then soared for them.

As much as it broke me, I loved Tell Me. The author's writing is beautiful. The story itself is filled with love and hope among a tragic loss. I probably should not have read it when I did, but I'm so glad I kept with it and fell in love.

Abigail Strom started writing stories at the age of seven and has never been able to stop. She lives in New England with her family, who are incredibly supportive of the hours she spends hunched over her computer. She loves to hear from readers and can be reached at abigail@abigailstrom.com.

Like all writers I'm a reader, too, and that's why I'm on Goodreads. I read everything, but especially romance, YA, mystery, sci fi, and fantasy.