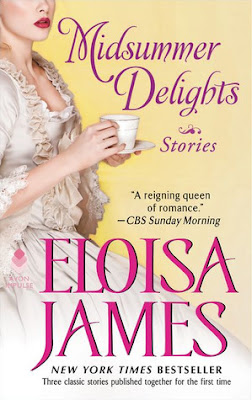 "Fair warning, Cecilia. I decided early in my life to spend my life trying to make you shiver...in every way I can. I'm far more learned in that skill than I was as a boy. These days I have no need for a grasshopper." - Duke of Ormond

A Midsummer Night's Disgrace
​Eloisa revisits the ​scintillating world of the Essex Sisters with a story featuring a young lady, Cecilia Bellingworth, who has decided she would rather ruin her reputation than endure further speculation about whether her children will be "silly," like her brother, Billy.​ ​After two failed seasons, ​Cecilia ​decides she ​will dress as she likes​ (in a scandalous red dress!)​ and flirt outrageously​ (with a scandalous pianist!)​. Fortunately, a gorgeous musician at the Duchess of Ormond's house party presents the perfect candidate for scandal…

At Midnight
​Elias Hempleworth-Gray has one thing and one thing only of value—his title, Earl of Leyton. Determined to leave England and the scandal of his gambler father behind, Elias hopes to turn his fortunes around and come back a respectable man to claim the only woman for him, Miss Penelope White. But Penny has other plans for the man she has loved all her life…plans that include a masquerade, a stolen kiss and a lost shoe.

Previously published in the Fairy Tale sampler (print only).

Ever After
When she was sixteen, Miss Violet Leighton spent one blissful month romping around her family estate with Rothwell Talcott…thirty days of shared kisses, culminating in a very illicit afternoon in a berry patch. As Rothwell leaves for his grand tour, he gives his word of honor that he will return for her. Four years and seven refused proposals later, Violet is about to give up and marry when he finally returns. Now the Duke of Cambridge, Rothwell wants to make her his duchess. But how can Violet trust the man who stole her virtue—and then broke her heart?

Previously published in The Ugly Duchess (print only).

At first glance, I thought that as someone who doesn't read a lot of historical romance, picking up Eloisa's Midsummer Delights would be a good way to tip my toes into the genre. Yeah, in theory, that was a fabulous idea. In theory... What really happened was that I wanted them to be longer... Not necessarily full length books, but at least longer novellas. All three short stories were adorable. They were long enough to fully grab my attention and short enough to leave me wanting more. Which means I'll probably have to try reading my first full length Eloisa James book in the near future. Anyhoo, out of the three short stories, I didn't have a favorite. I thought they were all equally adorable.

New York Times bestselling author Eloisa James writes historical romances for HarperCollins Publishers. Her novels have been published to great acclaim. A reviewer from USA Today wrote of Eloisa's very first book that she "found herself devouring the book like a dieter with a Hershey bar"; later People Magazine raved that "romance writing does not get much better than this." Her novels have repeatedly received starred reviews from Publishers' Weekly and Library Journal and regularly appear on the best-seller lists. After being a finalist for a RITA—the top award in the genre of romance fiction awarded by the Romance Writers of America—over ten times, she won in 2013.