YallWest 2018: Through the Eyes of a Romance Reader 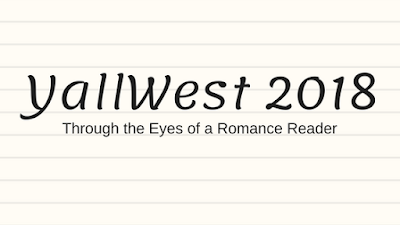 Hello friends. I feel like the title says it all. Last Saturday, I stepped inside the world of young adult and went to YallWest in Santa Monica. Why? Two reasons. One I wanted to check it out for myself. I've seen vlogs on YouTube and I wanted to experience the craze, if you will. Second, it was a chance for me and Ezrah from Eye Heart Romance to hang out. So off I went to catch a super early train to Santa Monica.

For those of you who don't know, YallWest is a young adult book festival, a west coast version of the popular YallFest. Publishers, authors, and readers of all ages flock to Santa Monica. On the whole, YallWest is actually a pretty amazing event. As sort of an outsider, I thought it would be fun to talk a bit about my thoughts on the event.

Price - The closest event I can compare to YallWest would be the Romance Times convention. Both focus on the readers and build relationships between the publishers/authors/readers. The difference is the price. While I would love to go to the RT convention one year, it is expensive. Whereas YallWest is free. Yes, there are panels and special events that cost money, but the event itself is free. If there was a free romance book festival, I'd be first in line.

Author Signings - While I did not get books signed (that was all Ezrah), I still liked how the signings were organized. The most popular authors were ticketed, of course, but their lines still moved pretty quickly. Quick lines allow readers to get more books signed, which is always a plus. If you were to focus on just the signings, I felt it would be feasible to get most of the authors.

Publisher/Author Attendees - I liked that the majority of the popular YA publishers were all there. Plus there was a pretty good assortment of authors. I did wish there were more booths with bookish items. The were a couple, but I would have liked a bigger variety.

Location - I'm really on the fence with this one. I loved that the location was easily accessible. It's held at Santa Monica high school, which was just a short walk for me from the train station. There was also plenty of parking, so people in attendance didn't have to fight for parking with people going to the nearby 3rd Street Promenade.

With that said, the problem I had with the location was that it was way too small! All of the booths were bunched up together, which made walking around difficult. Lines snaked here, there, and everywhere. That made finding the end of a line near also difficult. I wonder if holding it at nearby Santa Monica college would be a better place. It's bigger, so there's more room to spread out. Plus there'd be more of a food selection, which would have made the lines for the food trucks not nearly as long.

ARC Drops - Now this was what really ticked me off about the event. Most of the drops I saw were ran in an orderly fashion. You waited in line and when it's drop time, that was how they distributed the arcs.

That went right out the window with one particular publisher. There was one book I wanted to try to get. When time came, Ezrah and I waited in line with everyone else. When the employee announced that they were handing out tickets for the book, people ran to her. Instead of stopping them and continuing down the line, she gave them a ticket. That is not how the other publishers did it. You waited in line for the book, plain and simple. At this point in the day, I was done and it left a sour taste in my mouth. Would I have gotten the book if she went down the line? Probably not, but I'd have been okay with it if it was handled in a more organized manor.

With all of the pros/cons and things I felt could have been done differently, I still think YallWest is a fantastic event. Will I go again next year? Nope. Sorry Ezrah, I'll meet you in the area for lunch, but I'm not going near that insanity. I would have loved an event like this when I was younger. In a time when it felt like I was alone in my bookish world, I would have loved to spend the day with kids who loved to read as much as I did. And if there is one positive thing to take away from Yall West, it's that it is doing a damn good job promoting books. And I would love for something similar with romance.

Do you like book festivals? Which ones have you been to? And what is your favorite part about them? Comment below and let's chat!
Posted by CrystalBee at 3:54 PM