Review: Maybe for You (Whiskey and Weddings #3) by Nicole McLaughlin 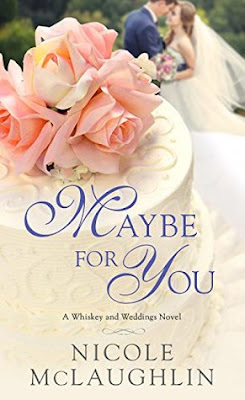 "I don't feel bad for you, Alex. You are strong, independent, incredibly intelligent, and attract people wherever you go just by being yourself. I have no doubt you'd have been just fine tonight if I'd chosen to go. It's me I feel sorry for, because tonight's my last night with you... And I don't know how I'm supposed to stop wanting you when this trip is over." - Jake Cooper

After a year of mourning her fiancé, Alexis Parker has worked hard to rediscover what she wants out of life. Fresh out of the military and back stateside, her brother offers her a marketing job at the Stag Distillery. Ready for a new challenge, Alexis agrees to accompany her new co-worker Jake Cooper on a Stag cross-country promotional tour. He may have an infamous playboy reputation, but Alexis is surprised to find out that there is more to him than meets the eye. And she likes what she sees. . .

Jake promised Alexis’s brother that he’d be an absolute gentleman. Of course, that was before he and Alexis hit the road, and they both agree that what Alexis’s big brother doesn’t know won’t hurt him. The plan: to keep their fling confined to the RV, and everything will go back to normal once they head home. Things progress in ways neither of them could have imagined, and Jake realizes that he and Alexis make a perfect mix. Can he convince her that he’s ready to shake things up and give true love a shot in Maybe for You?

Talk about a romance that'll hit you right in the feels. I mean, first we have Alex who just lost her fiancé. Now that she's home and surrounded by happy couples, it is hard for her to grieve properly. When the opportunity to do the Stag tour with Jake, she see's it as the perfect challenge to jump start her future and to just have a little bit of a breather. Of course, that also means spending a lot of one-on-one time with Jake. Who wouldn't want to spend glorious alone time with him? Yes, Jake is a playboy, but he's tired of being counted out. When his two friends and co-owners doubt his ability, it hurt him. And now he has the opportunity to prove himself on the tour and he's ready to show everyone that he's not the fuck-up they think he is.

I adored the previous book in Nicole's Whiskey and Weddings series and I friggin' loved Maybe for You. It was such a thoughtful and beautiful romance between two characters that I loved from the very first chapter. They're not looking for love, but they found the one person that makes them whole. And I appreciated that they're romance didn't end with just a happily ever after. Instead, Nicole took us on a journey as Jake and Alex discover their future together, through the ups and downs that define every relationship. I loved that part of the book.

I am so glad I found Nicole's Whiskey and Weddings series. I haven't read the first book yet, but it is one that I would love to pick up before the end of the year. Plus these covers are gorgeous. I need them in my library.

Nicole McLaughlin wrote her first full length book (6 pages) about the birth of her baby sister, when she was eight years old. She only finished it because her mother bribed her with a Rick Astley cassette tape. Sad, but true. Now her characters are what keep her writing and her subject matter has gotten a little bit deeper and a lot more romantic. She resides in a small town outside of Kansas City with her husband and three sons. When she isn’t writing, she’s a wedding and portrait photographer, loves to cook, and watch historical dramas or documentaries. She is the author of the Man Enough novel All I Ask and the Whiskey and Wedding series.