Spotlight: One More Moment (Band on the Run #3) by Samantha Chase 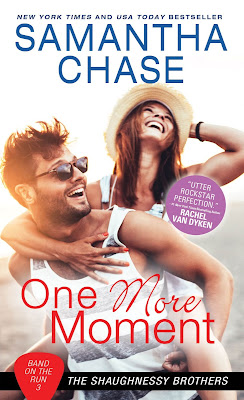 When Charlotte Clark offers to pay for Julian Grayson’s coffee, the world-famous drummer assumes she wants something from him. But Charlotte has no idea who he is, and Julian can’t resist keeping up the charade—being incognito is a novelty and a relief. He’ll have to tell her...eventually. But as Charlotte cheerfully undertakes to transform his life, Julian realizes there’s something about her that gives him what he hasn’t felt in years: hope.

She relaxed against him and her breathing was starting to even out as he kissed her again and began to hum. The melody had been in his head all week—a ballad. For almost a year, Julian had blocked music from his mind. Long before the wedding. He’d been so consumed with what was happening in his personal life that it had been impossible to think of anything other than what was going on around him.

But now the music was back, demanding to be heard.

Back at the house he was selling sat a magnificent baby grand piano. If he were there right now, he’d be sitting at it and working through the song in his head.

Instead, he hummed softly. It was so loud and strong in his head that he was surprised Charlotte couldn’t hear it with him. When he was certain she was asleep, he slid from the bed and gently covered her with the blankets before putting on a pair of sweatpants and heading out to the living room.

Grabbing a notebook, he walked out onto the deck and breathed in the beach air. He sat down on one of the lounge chairs and began to write down as much as he could about what he was hearing—he wrote out the melody, made notes on how he would like to see it orchestrated, and then played around with some lyrics. Those were always the hardest for him, but when the four of them were together, the lyrics always seemed to come.

That was why Riley couldn’t write.

That was why Matt couldn’t perform.

They were a unit, and no matter how much Julian tried to convince himself it wouldn’t bother him to retire from music, he was finding it was a lie. He wanted to play. He wanted to write and create and record and perform for the fans.

There were so many obstacles to overcome, however. And although most of them were his own mental issues, it didn’t make it any easier to work through.

Tonight had left him feeling what he hadn’t felt in far too long. Mainly happiness and hope. Could he really keep that going? Keep the momentum and work toward getting back to that place where he had been when he was maybe twenty or twenty-five? That was when

Shaughnessy was new and everything they did gave him a sense of accomplishment. Wouldn’t going back to that time be as counterproductive to him as focusing on the past five wasted years with Dena?

No. It took him less than a second to realize that. In one instance he was focusing on positive, where the other was purely negative.

Tossing the notebook down, Julian leaned back in the chair and sighed. The reality was that in the beginning, things with Dena were good and the two of them were happy. At least…he was. With nothing but calmness around him and his mood better than it had in a while, he could look back on those years with more of an open mind.

Yes, some of the time together had been good, but he knew now the exact point when he should have walked away.

And it was certainly before he was standing at the front of a church for his own wedding.

Raking a hand through his hair, he stared up at the sky. It was cloudy and dark with not a star to be seen. How could he have been so blind for so long? How could he have given up so many years to something that left him feeling nothing but rage and emptiness? Because of his own stubbornness, he lost everything. Okay, not everything. He still had his friends, his health, and most of his finances—damn Dena for that payoff he’d made to get rid of her—but there was still a large part of himself that was missing.

Charlotte’s soft voice called from behind him. He turned and saw her standing in the doorway wrapped in the afghan from the sofa. Holding out a hand, he silently beckoned her to him. She seemed to float like an ethereal vision toward him. When she was next to the lounge chair, he carefully guided her down until she was cradled in his arms.

“What are you doing awake?” he asked softly, combing the hair away from her face that was blowing in the ocean breeze.

She kissed his jaw. “I woke up and you weren’t there.”

Everything negative that he’d been thinking was gone. This woman—this amazing woman in his arms—was all he wanted to think of. He kissed her forehead. “My brain wouldn’t be quiet, so I came out here to write a bit and then I was enjoying the peacefulness of the night.”

“Mmm… It’s good isn’t it?” she asked. “That’s why you found me on the beach that

He shifted to get them more comfortable and when the afghan slipped, he noticed she was naked beneath it. His eyes met hers and she gave him a shy yet mischievous grin. “Had I known what was going on underneath this blanket, I would have come back inside. You must be cold.”

But Charlotte shook her head. “Not when I’m near you. You always keep me warm.”

Holding her closer, he felt so many emotions that he had no idea how to put them into words. Did she have any idea how the things she said made him feel? Affected him? Did she know that every day with her had him this much closer to falling in love with her?

And even saying it in his mind didn’t scare him.

Reaching up, he cupped her cheek and kissed her lips. They were soft kisses. Gentle kisses. Shy kisses. Charlotte was warm and sleepy in his arms and with nothing but the moonlight over them, she was beyond lovely. 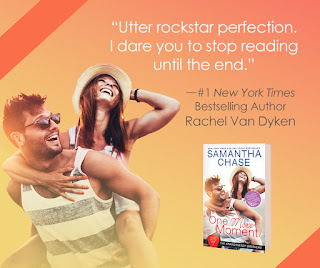