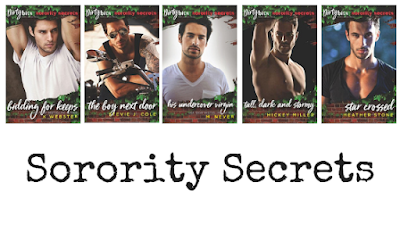 The virgins of Beta Kappa Nu would do anything for each other. Even auction off their most valuable asset…

I don't know if you've noticed, but I'm addicted to sex-filled novellas. They are just so much fun to read! Whether I'm in the middle of a book and I need a breather or if I want a palate cleanser between books... I am always down for a super sexy and super quick good time. Wow, that sounded way better in my head.

Most of the sexy-filled novellas I've been reading are part of a longer series and I've been torn on whether to review them separately or to combine them in one series review. I've decided to stop lolly-gagging and try a series review. The verdict is still out, but I'm liking it so far.

We're starting out with the new Sorority Sisters series from Carina's Dirty Bits line. If you love sexy novellas and you haven't picked up a Dirty Bits title, you need to remedy that. They're short, sexy AF, and always end with at least a HFN. I think Carina explains them better - For those times when size does matter. The Dirty Bits from Carina Press: quick and dirty, just the way we like it.

Vivi Prescott loves Beta Kappa Nu. It’s her escape after a lifetime of living under her wealthy father’s overbearing thumb. She’ll do anything to help her sisters, including auction off her virginity to the highest bidder.

One tiny hitch. She’s not a virgin.

She gave that up three and a half years ago. Right there in the back of her brother’s best friend’s pickup truck. Dallas Monroe was a smug country boy with a dirty ball cap, torn jeans and a perpetual smirk. He showed her what pleasure could be, then let her go without a fight.

The mysterious, arrogant playboy who places the winning bid won’t ever know her secret. But his touch is so familiar, his mouth the one she’s been fantasizing about since forever.

Sorority Secrets started off strong with Bidding for Keeps. I love a good angsty romance and this novella had it all. Brother's best friend... First love gone wrong... Hero doing what he thinks is best for the heroine... Yes, please! Dallas starts off the novella as an asshole, but readers quickly learn how much he loves Vivi. He'll do anything for her. Vivi is tenacious. Dallas broke her heart and she's damn sure she won't let him toss her aside again, even if he thinks it is for her own good. She sets out to prove to him that they're love is real and it's worth fighting for.

Overall, great novella to start the series with. Loved Dallas and Vivi. Their sex was sizzling. It made me want to dive headfirst into the nearest new adult book I've got on my shelves.

I’ve been in love with Emma since we were thirteen years old.

That part is real. But nothing else they say about me is true.

The way she looks at me from across the room, how she makes my old T-shirts look good, how perfect she feels when she’s in my arms. That’s what I want to picture when I think about Emma. Not a crazy auction where she gives it up to some random creep.

Despite the tattoos, despite the rumors, despite my reputation as a class-A player—there’s never been anyone else. In my bed or in my heart.

Oh, my god. The Boy Next Door was my favorite novella from the series. I could devour this one all day and twice on Sunday. The Boy Next Door is a friends-to-lovers romance between Evan and Emma. The only way I could have loved this more would be if it was a full length book. I loved watching them butt heads. The chemistry and sexual tension between them was sizzling hot. Such a sexy novella!

Officer Eli Kirschner is accustomed to going deep undercover. This time—this job—is different, though. A suspected prostitution ring, with college girls sent off to the highest bidder.

A face like an angel. The thought of someone taking advantage of her makes my blood boil.

Eli is blindsided by Ash’s innocent allure. The instant pull she has on him and the way she makes him feel again.

I’ve encountered a lot of women, but none that have affected me on a primal, paramount, primitive level. The desire to protect is immeasurable.

Caught between duty and desire, reality and fiction, Eli continues the ruse as the intensity of his relationship with Ash deepens.

I’m not a wealthy businessman. I’m a cop who barely has two nickels to rub together.

When Ash comes clean about her reasons for auctioning off her virginity, Eli’s decision is made.

I want her in my life, in bed and in my heart indefinitely.

He could never turn the girls in and risk losing Ash forever. But will Ash stay once she learns the truth about him?

His Undercover Virgin was another novella from the series that I would have loved as a full length book. It would have made a fabulous secret identity romance. The romance felt a little bit rushed, mostly because it is the only story in the series where the two lead characters didn't have a prior relationship (or at least know of each other). I did really enjoy it, but I would have loved it more if it was longer.

They say I’m a rich, bitter a**hole who isn’t capable of normal feelings.

Well, they say a lot of things.

And they don’t know shit.

You don’t become a billionaire without a strain of obsession bubbling within you. Strong and true, like a deep blue pilot light.

It’s true, I don’t suffer fools. And I don’t have time to become emotionally involved.

I loved once before. This is my curse. It keeps me focused.

Until I see Stacy’s ad. The office intern, auctioning off her virginity for charity, right there on the screen.

And they’re about me. Her boss.

I’ll be damned if one of these tasteless men with no appreciation for this smart, beautiful angel will be her first.

If anyone has her, it’s going to be me.

Holy cow... YES! I love office romances, especially if there is a bit of taboo in the relationship (boss/employee, etc). I think it has something to do with the hero in a suit. Yum! I loved Tall, Dark and Stormy. This one was hot AF.

Caroline Littrell might be the baby of Beta Kappa Nu, but she’s also the brains. When her sisters concoct the ridiculous idea to auction off their virginity for charity, she’s adamantly against it…a promise is a promise, but quiet, Ÿbersmart Caroline has a backup plan.

All she has to do is track down Mathewson Jameson—campus legend, local rock god, total jerk—and convince him to play a charity concert for them instead.

The problem? Mathewson isn’t quite the jerk Caroline imagined. In fact, he’s quite the opposite: patient, giving, gentle. And the only one she wants to be with, first time or forever…

Star Crossed opened my book world do romances with a college band... And now I want more. Again, I wanted it to be a bit longer to explore the whole band scene, but I also loved it just as it was. It was a little taste of sweet mixed with a lot of spice.

Overall, I loved the Sorority Secrets series. I especially loved that each novella brought something different to the series. They were all sexy as hell, but there were also tender and sweet moments mixed in. I hope Carina does another series like this again in the future.

Her other passions besides writing include reading and graphic design. K can always be found in front of her computer chasing her next idea and taking action. She looks forward to the day when she will see one of her titles on the big screen.

Stevie J. Cole likes to write realistic stories with raw, gritty characters you should hate but can't help but to love.

She's obsessed with rock music, loves sloths, and has an unnatural obsession with British accents.

Her books are not recommended for the faint of heart.

Mickey Miller is one of seven men who are members of the Romance Writers of America. He loves playing sports, performing improv, and pineapples. After trying his hand at screenwriting, he found his passion being one of a handful of guys who writes over-the-top contemporary romance novels. He lives in Chicago, IL and yes, his Grandmother knows what he does for a living. But she keeps it on the DL.

Heather Stone has lived most of her life with her head in the clouds. Constantly concocting fairy tales and fictional worlds, she decided to finally put pen to paper. What came was sexy alpha males with their very own happily-ever-afters. Heather lives in the midwest with her husband and two children.