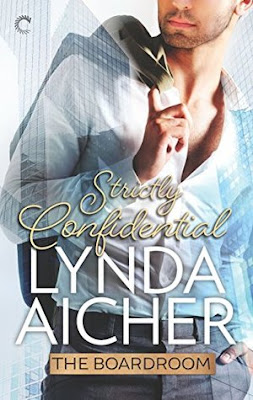 From Lynda Aicher, author of the bestselling Wicked Play books, comes an exclusive invitation to the Boardroom—where working late has its rewards.

Life is about power—who has it, who doesn’t.

Anyone who says otherwise hasn’t spent time in Kennedy Keller’s business-casual two-point-five-inch heels. A woman in a world very much run by men, Kennedy does whatever it takes to keep her power, in the office and outside of it.

Until she lets her guard down and decides to submit to a man for just one night. He’s everything she doesn’t usually let herself have: sexy, strong…dominant.

Matt Hamilton said goodbye to the Dom life years ago—power games and the delectable push/pull of dominance and submission might start in the bedroom, but it never stays there.

Reunited in the Boardroom, Matt and Kennedy test their desires and boundaries…and learn that one night is never just one night.

Strictly Confidential, the third book in Aicher's The Boardroom series, readers are introduced to two new Boardroom members - Kennedy Keller and Matt Hamilton. Matt and Kennedy visit the Boardroom for different reasons. The daughter of the CEO, Kennedy has been groomed for the corporate office all her life. The Boardroom allows her the freedom to own her sexuality. It also gives her a sense of power knowing that men come to the Boardroom for her. After his wife left him and their two children, Matt has had to lock away a side of him that cost him his marriage. She wanted more than what Matt could give. Kennedy isn't submissive and it surprises her that she's turned on by Matt's control in the bedroom. Matt doesn't want to be a dominate, but Kennedy's willingness towards control play is more than he could ever imagine.

To be honest, it took me a couple chapters to get into Strictly Confidential. I'm starting to think I am coming into a reading slump because once I got over whatever roadblock I was dealing with I couldn't put the book down. I know I've been saying this a lot lately, which is why I'm pretty sure I have a slump on the horizon. Once I got hooked, I was all in. The best part about this book was that the beginning took place in my hometown. Yes! I love books that are in places I know. I also loved the dynamics between Kennedy and Matt. They were both vulnerable characters for different reasons. I loved how their vulnerability brought them together. Yes, they originally connected through sex, but it was also through sex that they were able to express themselves and grow closer. I'm all for raunchy sex scenes that have a deeper meaning and that runs throughout this series. I am already looking forward to the next novella, which I may actually pick up next. I need something quick and sexy and Lynda always delivers.

Lynda Aicher has always loved to read. After years of weekly travel implementing computer software into global companies, she ended her nomadic lifestyle to raise her two children. Now her imagination is her only limitation on where she can go and her writing lets her escape from the daily duties as a mom, wife, chauffeur, scheduler, cook, teacher, volunteer, cleaner and mediator.