Spotlight: Under the Northern Lights by S.C. Stephens 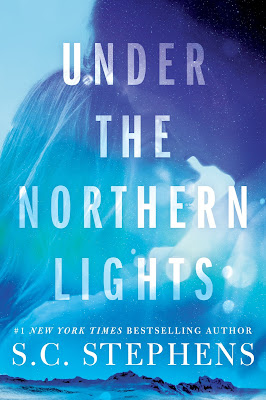 Mallory Reynolds is a driven woman fueled by her passion for photographing wild animals in remote locations. Every year she makes a trek deep into Alaska, but this time the unthinkable happens: she crash-lands after her plane stalls out in a storm. Injured, vulnerable, and threatened by the very creatures she loves, Mallory fears the worst—until she’s rescued by Michael Bradley, a mysterious mountain man living in self-imposed exile.

Mallory is grateful for Michael’s help but desperate to return home to let her family know she’s alive. Unfortunately, neither of them can leave Michael’s secluded cabin until spring. Mallory’s stuck with a stranger for months.

As Mallory recovers, a deep bond begins to form between the pair. Mallory is convinced that fate brought them together, but Michael is buried in his past, unable to move forward. Undaunted, Mallory tends to Michael’s heart as tenderly as he cared for her wounds—but will her love be enough to heal him?

My latest book, Under the Northern Lights, is about Mallory Reynolds, a driven, passionate woman who is pursuing her dream of photographing wild animals in remote locations. On the way to her favorite spot in the Alaskan wilderness, the unthinkable happens—the engine on her plane stalls and she crashes. Mallory survives the crash only to find herself injured with limited supplies and no hope of returning home. Just when all seems lost, Michael Bradley, a mysterious mountain man, comes to her rescue.

Planning on being in the wild for just a couple of weeks, Mallory only brings a few important items with her into the wilderness—a gun for protection, survival gear, a limited amount of food, her cross necklace for her faith, and her most prized possession, her camera. After realizing that she’s going to be spending the entire winter in a secluded cabin with a stranger, she probably wishes she’d brought a few more items along with her. Things like a high-powered rifle, a chainsaw, a snow mobile, a lot more food, and even better—a satellite phone.

We both heard a loud clatter outside. Michael instantly snapped to his feet, his face intently focused as he listened for further sounds of trouble; he had no human neighbors to speak of, so things were generally silent here.

Fearful curiosity was killing me, and I was dying to ask him if he knew what was out there, but I didn’t want to disrupt his concentration. And it turned out I didn’t need to ask. Seconds later, I heard the deep, resonant, unmistakable growl of a bear.

He grabbed his high-powered hunting rifle, and my heart started thudding. Was he nuts? If there was a hungry bear out there, we should be barricading the cabin, not going out into the wilderness. “What do you think you’re doing?”

Lips twisted in a frown, he told me, “All our food is out there, our meat. If I let the bear destroy it, we’ll have nothing to get us through the winter.”

I knew he was right, but still, I was terrified. “Okay … I’ll help.” I grabbed my gun and checked it for bullets. It wasn’t as powerful a rifle as Michael’s, but it might hurt the bear enough that it would change its mind about gorging on our food stash. Or it might just piss it off.

Studying my gun, Michael shook his head. “No, stay in here—guard the cabin.”

His answer made me frown. “The bulk of the food isn’t in here. There’s nothing to guard.”

His eyes softened then. “Yes … there is something to guard.”

My cheeks heated when I realized he meant me. “Be careful,” I whispered.

“Always am,” he stated; then he darted out the door.

Racing to the window, I peered outside, searching in vain for some sign of Michael or the bear. The moonlight wasn’t strong enough to illuminate much, and even though only candles were lit in the cabin, it was enough to wreck my night vision; I couldn’t see a damn thing out there. My nerves spiked, and my heart started racing. I felt like I was out there in the woods, possibly about to get mauled, and following Michael’s orders and staying put grew harder and harder with every second.

I strained my ears, listening for the bear since I couldn’t see it. Sounds of lumbering steps crashing through brush met my ear. Then I heard the dreadful sound of sharp claws raking down wood. With no electricity, freezers weren’t an option here. Michael stored his food the old-fashioned way, either drying it into jerky or curing it with salt. The prepared food was kept in his enclosed workshop, and while Michael had bear proofed the shop as much as possible, hungry bears were tenacious. With food being so close to its reach, the grizzly might not stop until it had ripped the door to shreds.

Knowing where the bear was outside calmed my nerves somewhat. I fingered my rifle, debating whether running out there would help Michael or hurt both of us. It was dark, and if Michael thought I was inside, he could shoot me just as easily as the bear. And verbally warning him would get the bear’s attention—attention I’d rather not have. No, it would be best to stay put and let Michael handle it. But still … that was hard to do.

I heard Michael shout then, yelling at the bear to leave. A gunshot rang through the night, startling small nocturnal animals and rattling the windowpanes. Another one followed shortly after, and fear trickled down my spine. Was that a warning shot? Or was the bear attacking?

Michael wasn’t shouting anymore, and the night was still, silent. Oh God, no … The ball of dread in my belly was too great to ignore, and I nearly tripped in my haste to get to the door. “Michael!” I screeched into the night as I flung the door wide.

A dark shape was suddenly right in front of me, and as I stared in shock, a gaping mouth of thick, sharp teeth opened, and a powerful roar pushed me back a step. I’d never been so close to a bear before, and my legs felt like water. I couldn’t move them, couldn’t move anything. My mind was trying to avoid the here and now by drifting off to happier times with my family, my friends. Death was once again staring me in the face, but even still, the part of me that was still cognizant of the present was awed and amazed by the ferocious beauty of the beast before me. There was a reason these creatures ruled the forest.

The bear rose up on its hind legs, visually warning me that it was bigger, stronger, and most likely hungrier. My eyes flashed to the various weapons it could use in an instant to end me—talonlike claws, ice pick–like teeth, or just its massive weight. All I had was a gun.

Thinking of my own weapon jostled me from my state of panic. Raising the barrel, I chambered a bullet and yelled at the bear to back off. It seemed a poor tactic at this point, but I didn’t really want to kill the animal. If I could scare it into submission, I’d take that as a win.

The bear, however, was unimpressed by my shouting. Landing heavily on its front feet, it began lumbering toward me. Damn it, I was going to have to shoot. And hope my gun did more than anger it. With shaking fingers, I lined up my shot. “Please go away,” I murmured, putting light pressure on the trigger.

Like it heard me, the bear suddenly looked to its left. It growled again and took a step back, away from the cabin. I heard Michael’s voice, and then a gunshot rang out in the night. The bear roared again, then seemed to realize it was outmatched. It turned and ran, its winter bulk vibrating with each thundering step.

I was still shaking as Michael stepped into view. Disengaging the gun, I dropped it on the ground and flew over to him. Before I knew it, my arms were around his neck, and I was pulling his firm body into mine. Thank God he was okay. Thank God I was okay.

“Oh my God, Michael,” I murmured into his shoulder, inhaling his woodsy scent. “That was terrifying. I thought for sure…”

Once I fully comprehended that I was squeezing the life out of him, I froze, every limb rigid with tension. I wasn’t sure if Michael would push me away or not, but then he surprised me by wrapping an arm around my waist and pulling me into him just as hard as I was holding him, maybe harder. As we held each other, the anxiety and fear started easing, and I was flooded with warmth; I’d never felt more at peace. 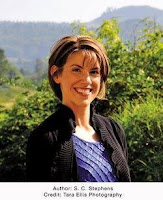 S. C. Stephens is a bestselling author who enjoys spending every free moment creating stories that are packed with emotion and heavy on romance. Her debut novel, Thoughtless, an angst-filled love story featuring insurmountable passion and the unforgettable Kellan Kyle, took the world of romance by storm in 2009. Stephens has been writing nonstop ever since.

In addition to writing, Stephens enjoys spending lazy afternoons in the sun reading fabulous novels, loading up her iPod with writer’s block–reducing music, heading out to the movies, and spending quality time with her friends and family. She currently resides in the beautiful Pacific Northwest with her two equally beautiful children.