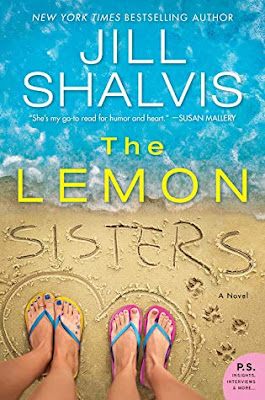 "Never be ashamed of who you are. That's your parent's job." - Garrett

Brooke Lemon has always led the life she wanted, wild adventures—and mistakes—included, something her perfect sister, Mindy, never understood. So when Mindy shows up on Brooke’s doorstep in the throes of a break-down with her three little kids in tow, Brooke’s shocked.

Wanting to make amends, Brooke agrees to trade places, taking the kids back to Wildstone for a few days so Mindy can pick up the pieces and put herself back together. What Brooke doesn’t admit is she’s just as broken . . . Also how does one go home after seven years away? It doesn’t take long for Brooke to come face-to-face with her past, in the form of one tall, dark, sexy mistake. But Garrett’s no longer interested. Only his words don’t match his actions, leaving Brooke feeling things she’d shoved deep.

Soon the sisters begin to wonder: Are they lemons in life? In love? All they know is that neither seems to be able to run far enough to outpace her demons. And when secrets surface, they’ll have to learn that sometimes the one person who can help you the most is the one you never thought to ask.

I had a mixed bag of emotions with The Lemon Sisters, which was surprising because I've loved the 2 previous books and novella in  Wildstone series. I loved Brooke and Garrett. Characters that are able to overcome insecurities and obstacles that plagued them for years typically win my heart. And that definitely was the case with these 2. I adored them. It takes a strong character to willingly face their past and own up for their actions. Both Brooke and Garrett carried around pain and heartache from their young romance. It wasn't easy for Brooke to open up to him and it wasn't easy for Garrett to hear the truth, but once it was out there and they were able to process what happened, they were stronger for it. And I loved that.

Sounds great, right? Well... It was... Until I met Mindy. I get that she's going through a rough time. Thinking her husband is having an affair and the fact that he's barely home will wear a person down. I get that. I also get that her relationship with her sister Brooke is taxing because they aren't close as they once were. I get that. I just wanted her to pull up her big girl panties and deal with it. Do something about it instead of hiding out in Brooke's home. I desperately wanted Brooke to slap her and tell her the snap out of it ala Cher from Moonstruck. She never really stops to think about what Brooke is going through until we're a good chunk into the book. And because of that, I was never really able to connect with her and that made a good portion of the beginning of the book lag a bit for me.

Overall, I enjoyed The Lemon Sisters. I loved Brooke and Garrett. Watching them grow was amazing. It just took me a bit to get into the book, mostly because of Mindy.