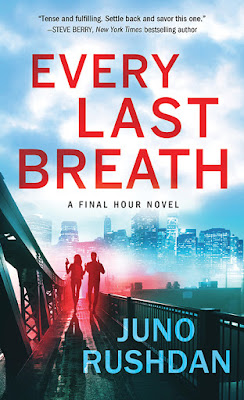 "Fine. You win the poor-me award. Should we have your trophy engraved?" - Maddox Kinkade

48 hours
2 covert operatives
1 chance to get it right

Maddox Kinkade is an expert at managing the impossible. Tasked with neutralizing a lethal bioweapon, she turns to the one person capable of helping her stop the threat of pandemic in time: the love of her life, back from the dead and mad as hell at her supposed betrayal. Recruiting Cole to save millions of lives may be harder than resisting the attraction still burning between them, but Maddox will do whatever it takes...even if it destroys her.

When Maddox crashes back into Cole Matthews' life, he wants to fight back. He wants to hate her. But the crisis is too strong to ignore, and soon the two former lovers find themselves working side-by-side in a breakneck race to stop a world-class killer with a secret that could end everything.

The clock is ticking.

Juno Rushdan should be on every romantic suspense lover's radar. Whether you love your books heavier on the romance or heavier on the suspense, it doesn't matter. Every Last Breath had enough romance and sexual tension to make any romance lover happy with enough suspense to keep thriller lovers on the edge of their seat. The detail Juno goes into to create this world was amazing. I love that the mystery that drove Every Last Breath is one that'll continue to play out in future books. I love that she took her time setting up the characters and the predicament they're in. She makes you want to know what happens next. Months later, I am still on the edge of my seat waiting to see what happens in the second book.

No thought of how far he’d have to run, how long he had to push, Cole held a singular focus: catch the Ghost.

To keep Maddox safe, he had to reach the devil first.

Extending his stride in a flat--out sprint, Cole gave it everything. His shoulder hurt like hell.

He was gaining on him. Less than thirty feet, chipping away at the distance with every hot lungful.

Just ahead was the Gallery Place Metro—-one of the busiest stations in DC. A throng of passengers streamed in and out of the cavernous entrance. The Ghost wove between people, darting to the left then right, flowing like a stream of water around stones.

Cole knocked a man out of the way and slipped through a narrow opening in the pedestrian herd. The entrance cleared ahead, and there was Novak.

The Ghost zipped past the station agent, Metrorail vending machines, and vaulted over the turnstile in one fluid motion.

Steamrolling forward into the musty air and under the fluorescent lights of the station, Cole hopped the turnstile.

Cole cut to the east side of the Metro station, keeping sight of the Ghost. Escalators to the trains on the lower level were around a corner. Hopefully, passengers lining the moving staircase would slow Novak down.

What if he deployed the weapon in the station or on the Metrorail? The virus would spread fast with no way to contain it.

Novak hesitated at the escalators and snapped a glimpse over his shoulder, not looking the least bit winded. Their eyes met, and that freakish smile hitched up Novak’s mouth. In a flash, he whirled, facing the escalator.

Then he jumped onto the wide metal panel running between the escalators and slid down.

Breathless, Cole reached the escalator and peered over the side. Down a long, steep descent running several stories below ground. Really fucking long and very steep.

Sonofabitch. Novak had no limits and kept pushing the line. Cole hated heights, but that lunatic was getting away, and Maddox was closing in. No time. No time to think.

He vaulted onto the steel divider flanked by the two escalators.

“Dude, you’re crazy,” quipped a teenage kid getting off.

It felt a hell of a lot crazier than it looked. With the constraints of the narrow panel, Cole was forced to roll onto his side as

Novak had done. Maddox’s pounding footsteps drew closer. Not giving himself a chance to chicken out, he let go and gravity took him.

In a lightning rush, he zipped down cool, smooth steel feetfirst.

His jackhammering heart blasted into his throat, followed by his stomach. He slid down the tight divider like a slick stone.

The faces of gawking onlookers were a blur. He braced, leaning back against the steep, eighty--foot decline. He almost swallowed his tongue.

To control his breathless descent, he thrust his forearms out to the sides.

His sleeves dragged against the rubber handrails, the friction turning his quicksilver slide into a jerky ride. He feared flipping over the side onto the steel teeth of an escalator.

Weightless, helpless, he drew his arms in close to his body.

Not every Metro in DC had bumpers. The puck--sized discs didn’t stop a fall, only turned a person into tenderized meat by the time they reached the bottom. He was grateful not to face any here.

The ground below was a desperate hope rushing toward him, coming at him fast. But it was the longest eight seconds of his life.

It’d keep him sharp and hungry. Keep him alive.

Novak reached the bottom and glanced up at Cole before disappearing in the direction of the Red line.

Swooshing off the metal panel, Cole’s feet stumbled finding the floor. The electric surge rising in him was akin to being born again. He fell to one knee and sprang forward, following the trail of twisting heads and necks craned over shoulders.

The corridor spilled onto the westbound platform. People stood shoulder to shoulder. Jam--packed with kids, from teens to middle-schoolers, in a patchwork of yellow, green, light--blue, and red T--shirts.

Across the tracks, the eastbound side was worse. He glanced at the inbound train sign overhead—-three minutes ETA.

Three minutes before the Ghost could be lost in the wind.

Dim lighting in the concave tunnel turned needle--in--a--haystack into finding a needle in a pine forest, at night. Red LED lights lined the bumpy tiles along the edge of the platform but did nothing to brighten the landscape. Chest heaving, he slowed his breathing while scanning for a dark ball cap, black backpack. Anyone in long sleeves.

He shouldered past people, weaving around a huddle of kids and chaperones in light blue T--shirts that read Ride the Summer Wave. Every ten steps, he checked his rear, ensuring he hadn’t missed the Ghost, somehow overlooked him in the sea of passengers.

Maddox made it down, rushing onto the eastbound side across the tracks. She scoured the platform.

Cole pressed forward. Most bodies stayed stationary or paced one to two feet within a localized space. He caught glimpses of one person with a blue ball cap and backpack. Drifting slowly. Snaking around shifting figures. Cole bulldozed his way to the thin male.

Metallic bitterness coated his tongue. He clasped a hand on the man’s shoulder and wrenched him around.

“Sorry.” Cole raised his palms and backed off.

Red LED lights across the tracks on Maddox’s side flashed. A train was coming.

Two minutes until his westbound train arrived. He stepped up his pace through the milling flock of people, wiping his sweaty palms on his jeans. His sixth sense, the electric worm, carved a wriggling path from his skull down his spine, fizzing and spitting sparks across his nerve endings.

The rumble of the eastbound train resounded. Cole glanced back to see lights and Maddox peering down the tunnel at the inbound train. Dread churned his gut.

He faced forward and caught the Ghost’s steely gaze at the other end of the same platform. No baseball cap. The maniacal grin on full display. A moment. Less. A millisecond. Cole pushed toward him, storming through the gaggle of day campers.

Novak made his move. A bloodcurdling scream rent the air as the Ghost leapt off the platform, arm locked around a woman, hauling her over the side along with him. He let go of her and dashed across the westbound tracks, avoiding the electrified third rail.

Bounding over a strip of lighting in the middle, Novak rushed across the eastbound tracks. He jumped, pressing his hands onto the platform, and lifted his body with the fluidity of a gymnast. The flat--faced train whizzed into the station on the opposite side, concealing Maddox and the Ghost from sight.

Red lights flashed on Cole’s platform. He ran to help the fallen woman. Elbowing anyone in his way, he rushed to the far end.

The eastbound train on the other side stopped and the doors opened.

Cole swept paralyzed gawkers to the side and reached down to the plump woman in the light yellow T--shirt, Pirates and Princesses Summer Camp written across the front. Out of his peripheral vision, cowering children shrieked and whimpered.

“Come on.” He beckoned to the stunned woman clambering to her feet. “Take my hand.”

Chimes dinged from the train across the way, and his skin prickled. Doors were about to close.

“Let’s go, lady,” he snapped at her, trying to get her moving.

Lights of the approaching westbound train on his side did the trick.

A horn blared, kicking the woman into action, hustling to the platform. She grabbed both his hands and he held tight to her forearms and heaved. Thankfully, she was lighter than she looked, but his back still protested. A black kid in his late teens, with headphones on, helped him tug her the rest of the way up onto the platform.

She nodded, and tears streaked down her cheeks. Covering her face with her hands, she broke into sobs. Yellow T—shirts gathered around her, and Cole shot to his feet.

The train on the other side pulled out. The steel cars vanished down the dark tunnel. He swept a frantic gaze over the platform.

Cole’s blood drained from his head as a hot ball of panic burned a hole in his gut.

Maddox and the Ghost were both gone.

Juno Rushdan draws from real-life inspiration as a former U.S. Air Force Intelligence Officer to craft sizzling romantic thrillers. Although she is a native New Yorker, wanderlust has taken her across the globe. She’s visited more than twenty different countries and has lived in England and Germany. When she’s not writing, Juno loves spending time with her family. She currently resides in Virginia.