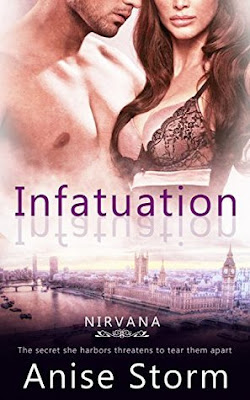 "I want to crawl so deep inside your skin, leaving no question as to who you belong to." - Finley Wetherall

Fate gives Hannah Brinkley a second chance with her one-time infatuation until the secret she harbors threatens to tear it all apart.

Fleeing the arms of one dynamic corporate tycoon, Hannah Brinkley crosses the Atlantic into the arms of another, who is equally as dangerous to her heart as Thaddeus Remington. Unlike the man she left behind in Atlanta, Hannah shares history with Finley Wetherall and those old feelings for him return once again.

Successful, powerful and hung up on the girl that got away, Finley is determined to fight for Hannah’s heart and do whatever is necessary to keep her. Years before, he was hesitant to make his move for fear that she couldn’t handle his dark desires, but when she turns up on his doorstep, it has to be Fate. He will allow nothing and no one to stand between Hannah and their destiny.

He soon finds out that he isn’t the only one harboring secrets. Will Finley be able to break down the walls Hannah has built around herself, or will she instead allow the ghosts of her past to destroy what they’re currently building?

Publisher's Note: This book is best read in sequence, as part of a series.

Anise Storm has firmly cemented herself as one of my go-to authors for erotic romance. There are no words to describe how much I am loving this series. Anise's writing style is impeccable. I love her balance of romance and sizzling hot sex scenes. Her characters are so well developed and fleshed out that you don't really know which team you should be on. After Obsession, I was firmly planted on Team Thaddeus, but after meeting Finley in Infatuation, he did all he could do to sway me to his corner. My advice, though? If you're not a fan of cliffhangers, you might want to wait until the third and final installment (which comes out in just a few months) is released, then binge read the 3 novellas together. And once you're done, add Anise to your must buy list. Trust me, she will not disappoint.

If you'd like to read my review for Obsession, you can visit the original blog post by clicking HERE.

Hannah knew Finley would be waiting on her and, even though she hated to make him wait even longer, she decided that being presentable was important. She entered the bathroom and saw that her earlier suspicions were correct. There were dark shadows under her eyes but surprisingly, her waterproof eyeliner had held up, since there were no noticeable smudges. Relieved about that small miracle, she touched up her makeup and hoped a good night’s sleep would eliminate the other issue.

Finally, she emerged from the restroom and made her way to the lobby. Hannah recognized Finley right away. He was standing there in his suit, looking every bit the corporate mogul she knew him to be. He was turned slightly away from her as he talked on his cellphone. It had been a familiar sight during her time at Remington Industries. She’d often seen Thaddeus, Martin and Isaac in a similar position.

Plastering on as bright a smile as she could muster, she took the last few steps to him. Hannah was prepared to apologize for inconveniencing him when he turned. His lips quirked into a smile and he hauled her into his arms.

“I’m glad you made it safely, Hannah,” he told her, as he loosened his hold on her. When she stepped back, he looked her over and added. “I hope you enjoyed your flight.”

“I did,” she replied and her fidgeting drew attention to her hands, because his gaze moved from her face to them, and he grabbed the carry-on bag from her. Hannah had no idea why she was suddenly so nervous. She’d spent a lot of time with Finley in the few years that they’d known each other. Although, two years had passed since then.

She wasn’t the same naïve girl that had left here and, while she had changed, it was a safe assumption that Finley had as well. She had also never stayed with him more than a night or two here and there. This wasn’t going to be a permanent arrangement, though. As soon as she found a job and saved enough money to get a place, Hannah planned to get a small flat.

“Well, let’s find the rest of your bags then we’ll head home.”

Finley mentioned home in such a casual tone, as if there was nothing strange about it. Barely nodding her head, she walked beside him until they reached the baggage area. The fluorescent tags on her suitcases made identifying them much easier. Soon, they reached the parking area and he loaded her bags into the trunk of his slate Jaguar F-type Coupe.

Posted by CrystalBee at 6:52 PM